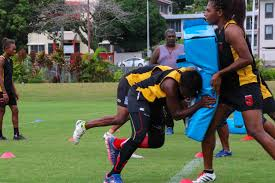 A RECORD number of women in the workforce and local women assistant referees are part of this year’s Oceania Rugby Sevens Championship reflecting a global movement to achieve more equal participation of women and men in rugby.

The number of women working in the tournament team has almost doubled in just a year, up from about 40 last year to 80 in 2018. In a first for the regional tournament, there will also be locally appointed women assistant referees – with two of the eight appointed from the Pacific being women.

Using rugby to promote gender equality and, longer term, to prevent violence against women is central to an agreement between Oceania Rugby and UN Women Fiji MCO, which is supported by the Pacific Partnership to End Violence Against Women and Girls (PacPartnership) funded by the European Union and Australian Government with support from UN Women.

“Oceania Rugby and World Rugby is committed to investing in having more women and girls involved in Pacific rugby, from players to decision makers at global level, and we’re pleased to be partnering with UN Women to achieve this,” said Cathy Wong, Oceania Rugby Women’s Director and member of the World Rugby Council.

“We are also excited to mention that on the match officials’ list is Australian referee Amy Perrett who was the first woman ever appointed to referee men’s teams in the Australia’s National Rugby Championship and also the first female assistant referee in Super Rugby.

“Children and families are also being encouraged to come enjoy rugby, too, with family-friendly ticket prices to watch the full competition,” she said.

This year there are again eight women teams competing, and 13 men’s teams, at the 2018 Oceania Rugby Sevens Championship (Oceania 7s), being held at the ANZ Stadium in Suva, Fiji, from 9-10 November. Two women’s teams competing for the first time at the Oceania 7s are New Caledonia and also Nauru – this is an historic moment for Nauru being its first National Women’s Sevens Team.

Abigail Erikson, Ending Violence Against Women Program Specialist for UN Women Fiji Multi-Country Office (MCO), that works across 14 Pacific Island countries, said the Oceania Sevens is a great example of the commitment by Oceania Rugby to change and to encourage more equal participation of women and girls in all aspects of the sport’s administration and competitions.

“UN Women, as the global champion for gender equality and the empowerment of women and girls, is proud to work together with Oceania Rugby toward an equal playing field,” said Erikson.

“By supporting more women and girls to play rugby and other sports at an equal level with men, we can encourage social change by demonstrating there is no limit to what women and girls can do.”

This is the second time UN Women is joining Oceania Rugby as its gender equality partner at Oceania 7s, with joint activities to include a ‘Women in Rugby and the Media Forum’; special presentations to the women’s teams; a new video promoting equal participation in rugby; a social media campaign to promote an #EqualPlayingField, and general event support.

This advocacy approach for Oceania 7s is one of several initiatives by Oceania Rugby and UN Women Fiji MCO through the EUR19.5million Pacific Partnership to End Violence Against Women and Girls program funded by the European Union (EUR 12.7m) and Australian Government (EUR 6.2m) with support from UN Women (EUR 0.6m).

A lot of women just won their elections, and hopefully someday this will stop being remarkable. To read more click electionsobserver.com