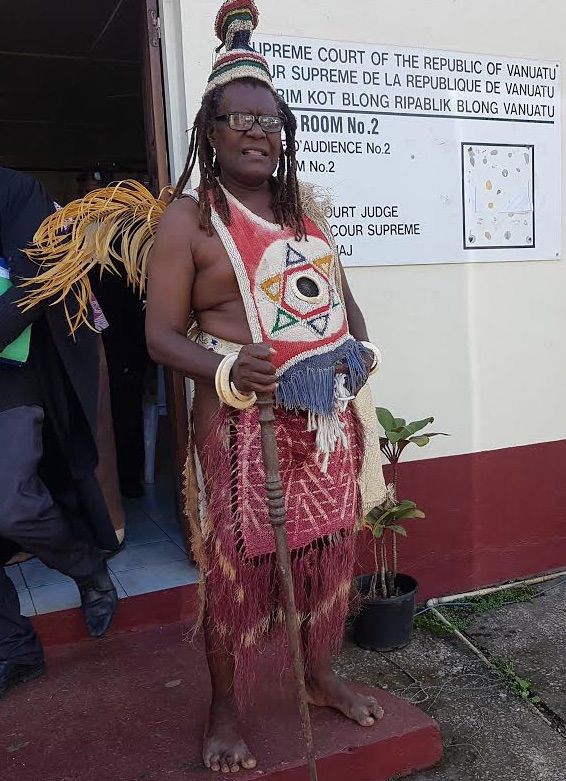 Pentecost Chief Viraleo Boborenvanua will have his judgement handed down on December 21, 2018.

This came about after he was given right to defend himself in court.

In his defense, Chief Viraleo refuted the accusation that he and his men unlawfully assembled and carried out a ‘Leo Dingvuha’ or customary eviction order on some people who allegedly trespassed and harvested sea cucumber in ‘Tahigoro’ or custom marine conservation area.

Viraleo denied 40 criminal charges laid against him in May 2018 and he defended himself in October after six professional lawyers who represented him in the past had difficulties presenting his case in the context of customary law.

He used customary law as the basis of his defense and his answer to every question during cross examination was ‘the enforcement of Leo Dingvuha’.

Chief Viraleo told the court that ‘Leo Dingvuha’ was the decision of the ‘Nakamal’ on December 11, 2015, when the alleged trespassers admitted that they have trespassed into the custom marine conservation area.

At the time they were immediately required to pay the imposed penalty fine according to the customary valuation system to move out voluntarily.

The high chief said in a press statement that failure to do so resulted in the last resort — the enforcement of the customary eviction order to move them out forcefully.

He explained that according to the customary law, every action that happened during the enforcement was an agreed fact by the Nakamal thus it was not a crime. He said it was similar to any Supreme Court eviction order that is enforced by the police to destroy home and properties.

He said the only difference is in custom when it comes to a good time then there will be the compensation and restoration of peace between the parties involved.

Chief Viraleo told the court that customary law existed in Vanuatu since creation and during the colonization period.

He mentioned ‘Leo Dingvuha’ has been practiced for centuries and will continue into the future.

He said it teaches people to respect customary law, which is recognized in Article 95 (3) of the Vanuatu Constitution that said; ‘Customary law shall continue to have effect as part of the law of the Republic of Vanuatu’.

The chief said it is the foundation for 12 sacred signs and symbols that gave birth to the independent sovereign state of Vanuatu and forms the basis for adopted law that came into effect in 1980.

He also stated that during the police investigation in this case the police officers did not show any respect for customary law and the courtesy to take his statement as the Chief of the Nakamal but immediately tied him up and arrested those who helped enforced the customary eviction order.

In his final statement, Chief Viraleo requested the Supreme Court to give the same recognition and prominence to customary law to ensure respect for both laws to work together for sustainable peace within the Republic of Vanuatu.