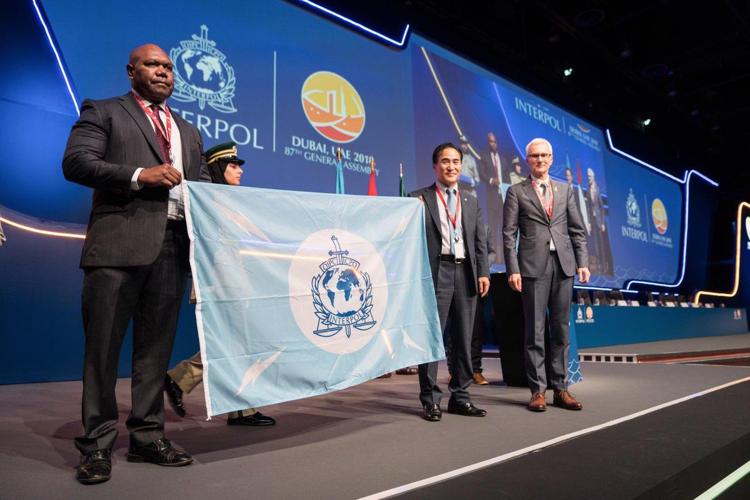 “I am really happy. This is one of the initiatives undertaken by myself and Minister Andrew Napuat when we took up new ministerial portfolios in December last year,” he said.

When confirming Vanuatu’s application to join INTERPOL in January 2018 to Daily Post, he cited the principle reason as “‘probity checks’” being carried out by the Financial Intelligence Unit (FIU) were proving to be deficient, particularly as concerns people applying to buy Vanuatu citizenship under the Development Support Program (DSP) and people applying to be nominated as Honorary Consuls”.

Resolution no.9 on the Membership of the Republic of Vanuatu was voted by the ICPO-INTERPOL General Assembly, meeting in Dubai, United Arab Emirates, from 18 to 21 November 2018 at its 87th session.

It garnered 135 votes in favour, 8 against and 9 abstentions.

The ICPO-INTERPOL General Assembly considered Article 4 of the Constitution and Resolution GA-2017-86-RES-01 on the process for membership of INTERPOL, took note of the application for membership dated 10 January, 2018 submitted by Vanuatu’s Minister of Foreign Affairs and considered the contents of Vanuatu’s application.

The Assembly also considered the requirements of membership, including that upon membership and in compliance with Article 32 of the Constitution, Vanuatu will appoint a body which will serve as the National Central Bureau (NCB).

A news item released by INTERPOL on November 20 confirmed that the INTERPOL General Assembly has voted to admit Kiribati and Vanuatu as new member countries.

The membership of the world policing body now totals 194.

Each application was approved by a more than two-thirds majority vote at INTERPOL’s General Assembly in Dubai.

The INTERPOL statement mentioned that a membership application from Kosovo was rejected by the General Assembly.

The new member countries will each now establish their NCBs which acts as the single point of contact with other NCBs and the General Secretariat headquarters in Lyon, France.

“NCBs are fully staffed and operated by national law enforcement bodies and operate in accordance with national legislation,” INTERPOL stated.

“Membership of INTERPOL means national law enforcement can instantly both share and receive vital policing information from around the world across a range of crime areas including human trafficking, drug smuggling, cybercrime, vehicle crime as well as terrorism.

“Whilst the widest possible cooperation is encouraged, INTERPOL respects the sovereignty of each member country. Member countries retain full ownership of the data they share with INTERPOL and they decide with which other countries their data is shared.”