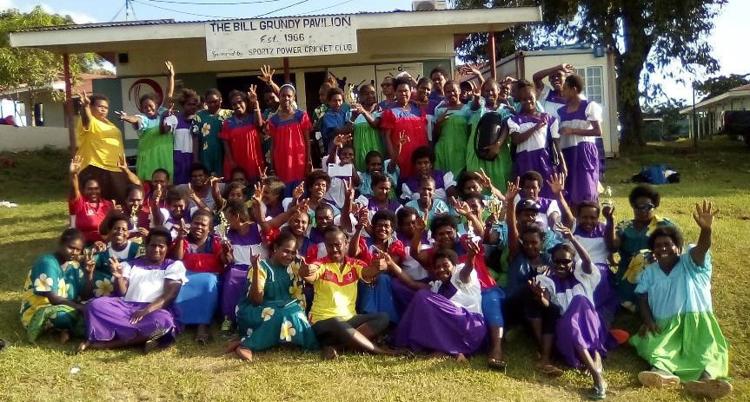 The Women’s Island Cricket (WIC) have ended their 2018 season in style by showing their eagerness to kick NCDs out of their communities and homes during their NCD Cup competition.

Mama’s teams from Eratap, Beverly Hills, Imaki and Pango participated in the competition with the sole objective and purpose to fight NCDs through sport specifically Island Cricket.

Tokalau Joseph, a representative from Eratap said, “I could not believe my team (Eratap) made it to the Final! This is the first time for us to play Island Cricket and to use it as a platform to fight NCDs is great. We really enjoyed all our games.”

Beverly Hills claimed their first ever grand final victory after defeating new comers, Eratap, but not before both teams put on a fantastic display of cricket which resulted in a tie and called for a super inning of an

extra 20 balls each as the tie breaker. Beverly Hills then had the upper hand with the bat to secure a four runs victory over Eratap.

VCA women’s cricket manager, Amelia Lawac expressed her excitement at the quality of the competition and said that she has seen a lot of improvement in the standard at which the mamas play.

“I am excited to see that everyone is having so much fun but at the same time play with so much skill. Eratap mamas handled the grand final really well even though it was their first ever Island Cricket competition but at the end of the day Beverly Hills proved that their skills have improved and they are worthy champions,” Lawac said.

“The aim of the WIC is to promote health, a healthy lifestyle and healthy living through sport and I think we achieved our aim not just in this competition but all throughout the year. We have more women who are interested and would love to join the program because they have seen or have heard the changes in the lifestyle of current participants,” she concluded.

The Women’s Island Cricket program will continue again next year and the VCA is looking forward to another healthy and successful year with the mamas.

Vanuatu Cricket would also like to acknowledge the Australian Government for funding this program through the Pacific Sports Partnership program.