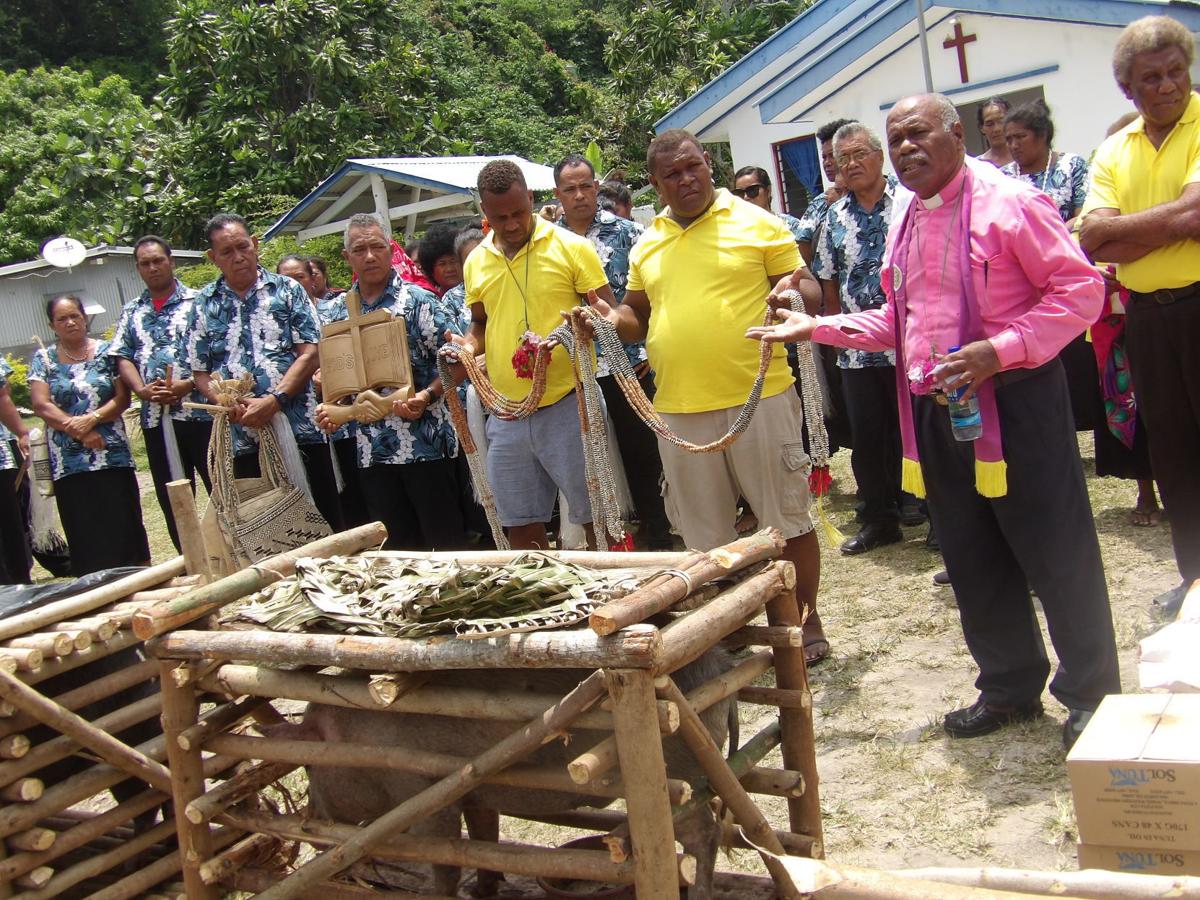 Posted By: Editorial Teamon: November 26, 2018In: News1 Comment
Print Email
The Labragona Tribe of Siviri Village on the road to North Efate has ‘turned the other cheek’ by giving the South Sea Evangelical Church (SSEC) of the Solomon Islands, a plot of land to strengthern the partnership between the Tribe and Presbyterian Church of Vanuatu (PCV) and SSEC, in memory of one of the sons of the Siviri Tribe, Preacher Thomas Tabangtang, who was murdered on Rennell Island in 1910.

Approximately two hectares, the land begins on the beautiful seashore behind the village and reaches the top of the plateau opposite the village soccer field.

According to the Head of the Siviri Presbyterian Church, Thomas Tabangatang, a member of Labragona Tribe, was one of the indentured labourers in the sugarcane fields in QueenslandIt was while he was there that he was introduced to the SSEC where he was groomed to preach the Good News.

On his return to the then New Hebrides, he was found by Pastor Peter Milne who took him under his wings as a potential preacher.

It was then that he assigned him to the Solomons as a preacher. Joined by Andrew Kanairara of Malaita and Tome Sautahanimae of Makira, they were sent to Rennell Island.

While there, Thomas Tabangatang saw the importance of a canoe for mobility purposes and asked a Rennell Islander to build him one. “He promised to exchange the canoe with an axe.

The deal was made but someone else has heard of the arrangement and handed Thomas a canoe and got the axe”, the Sivirian explains.

“This was where the problem started because the man who agreed to the arrangement with the Preacher, arrived with the canoe only to be told by Thomas someone has already given him a canoe and he gave the axe away”.

The story goes that the man became angry and got his people to chase all three missionaries to their deaths on the cliff.

Their bones were discovered sometime later and were buried in one grave on Rennell Island as it was not possible to recognise the remains.

After that, all attempts by Rennell Islanders to find the descendants of the late preacher were unsuccessful until only recently. Representatives of PCV and Churches of Christ Church went to the Solomons to strengthen the original partnership with the Solomon Islands SSEC, which cleared the way for the reconciliation ceremony by the Rennell Islanders of SSEC that took place at Siviri Village last Friday.

The Head of South Seas Evangelical Church explains that the ceremony in Siviri Village in North Efate is not a compensation for the death of Siviri Preacher Thomas Tabangatang on Rennell Island 108 years ago, but a ‘nasautonga’ in Efate custom to thank the Labragona Tribe for honouring SSEC and Solomon Islanders with the gift of land.

Sleepy Siviri Village on the left side of the road to North Efate and the Polynesian Rennell Island in the Solomons are two totally strange places to each other until the name of Thomas Tabangatang is called and tears well up in the eyes of both Melanesian and Polynesian.

Go to Siviri Village and scrutinise the writings on the memorial stone at the entrance of the Presbyterian Church at the end of the village, and speak to Chief Kalengoro Steele Masenawota and Chief Peter Masongo Mapula, and you will know the reason for the arrival of the large number of Rennell Islanders to Siviri Village last week, to clear 108 years of confusion, curse, sense of guilt and shame.

The large delegation from Rennell Island to Siviri Villatge added exceptional colours to the natural environment of the village as well as gave reason for the countless silent tears that dropped to remember the brave soldier of Christ, who was murdered on duty on the Polynesian Rennell Island 108 yeaers ago in 1910.

Late Thomas Tabangatang was directly related to Chief Kalengoro Steele Masenawota. The Solomon Islanders knew and honoured the chief and his family with shell money, root crops and live animals as well as an envelope of cash which they organised through Efate custom called “Nasautonga” or first crops harvested and handed over to the custom landowner for the land which he has allowed them to farm.

In this case it is symbolic as it reflects the generosity by Chief Kalengoro Steele Masenawota’s Labragona Tribe to hand over the land to the Solomon Islanders.

A representative of the islanders explains that the gifts are from the market because they have yet to farm the land.