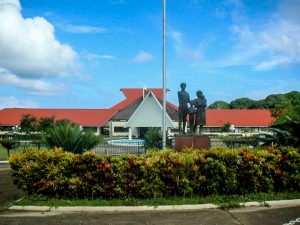 Vanuatu’s Parliamentary Opposition is set to lodge four legal cases in the courts today that may see the political landscape shifting even further.

The advice received is that there will be four cases lodged which will be dealing with the following issues:

It is believed that if the Opposition win anyone of these cases then it will have a serious impact on the current political environment in Parliament and the country.

The case with the legal attestation document if accepted by the courts as a commitment by a Member will leave such Member open to prosecution if he in changing his allegiance to government is appointed to a government position. The outcome of the case will definitely affect the future fortunes of at least two recently appointed Ministers and possibly some Parliamentary Secretaries.

There were many claims of forgeries and Members claiming they did not sign the attestations and the motions yet they voluntarily withdrew their signatures on the floor of Parliament. This case alone could prove that Members openly lied to the public at large which might be a breach of their oath of office when swearing an oath to become Members of Parliament which would open a new can of worms in an already volatile situation.

The bribery case involving a Member concerns the luring of a Member to the government side at  the time of the motion of no-confidence last week, and appointing him into a position which was created solely for him to join the government and a payment of Vt1 million (~US$10,000) shortly after his appointment. It is believed that the Opposition have sufficient evidence including proof of such payment made by the Government Treasury which could land the Member in hot water and the Prime Minister could be prosecuted as head of the Government for agreeing to and supporting such action in order to protect his government if the Court finds such an act to be illegal.

The fourth case to be lodged by the Opposition will be a constitutional challenge against the appointment of Parliamentary Secretaries with privileges including offices, staff and vehicles almost similar to Ministers. This practice was initially implemented to satisfy government backbenchers who missed out on being appointed Ministers of State and were satisfied with being appointed Parliamentary Secretaries for the extra salary, perks and privileges.

There has been a lot of public comment and opinion in the media in the newspapers, internet facebook and talkback shows about the appointments and performance of Parliamentary Secretaries.

There have already been precedent cases involving such Parliamentary Secretary appointments in which the Opposition will be basing its arguments both in India and Niue where the appointment of Parliamentary Secretaries was considered illegal and appointees had received their salaries and privileges illegally and thus had to repay such monies and return such privileges as accorded to them because of such appointments.

The situation could result in a lot of bankrupt Members which would automatically lead to them losing their seats in Parliament as a result of bankruptcy and in light of the upcoming 2020 General Elections, would be unlikely to participate unless they had benefactors who could buy them out of their bankruptcy which is highly unlikely.

The Opposition would only have to win at least two of their legal cases to change the political landscape and current political environment and these cases are already causing some concerns amongst the educated and more knowledgeable and aware Government Ministers, Backbenchers and Parliamentary Secretaries despite the victorious euphoria of defeating the recent motion and could lead to the Prime Minister and his government losing the numbers game.

Earthquakes leave tens of thousands without electricity around Anchorage. >>> world-news-network.com