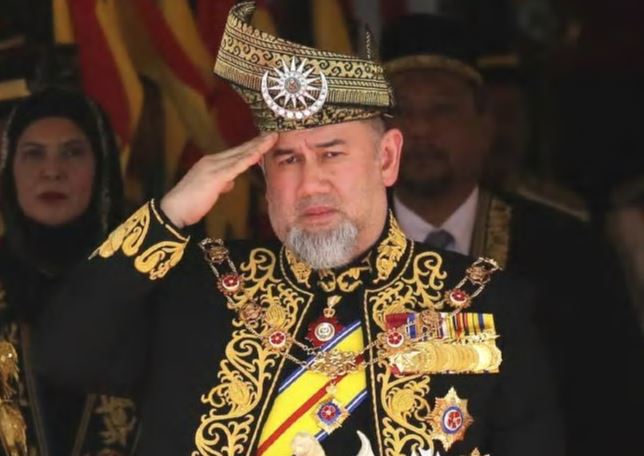 Just days after Malaysia’s King Sultan Muhammad V has abdicated his throne following his secret wedding to a former Russian beauty queen, the scandal has take another dramatic twist.

Oksana Voevodina, 25, — who converted to Islam last April just so she could marry King Muhammad, 49 — is reportedly “expecting” the couple’s first baby.

“The couple is expecting their first baby and has fully devoted themselves to the future offspring,” an anonymous sources reportedly told the KP.

Two days ago, King Muhammad dramatically stepped down from his throne, and it is not known why as he did not give officials a reason.

But rumours have linked his so-called secret marriage to Oksana to his abdication.

Oksana’s dad wouldn’t comment the reported pregnancy, or his sudden abdication, when speaking to the publication.

“They have their own lives, I live mine,” he said.

“But I can tell you one thing, as a doctor. When I met him for the first time, I relaxed somewhere deep inside.

“I immediately felt that Oksana would be doing well with him. Maybe, my father’s heart told me.”

King Muhammad resigned after spending only a few days back on his royal duties. He had been away for two months on medical leave.

In a statement, the palace said the king was grateful for the opportunity given to him by the Council of Rulers and thanked the prime minister and government.

The statement in full read: “His Highness has worked towards fulfilling his responsibilities entrusted to him as the head of state, serving as a pillar of stability, source of justice, the core of unity … for the people.”

It is not known how the pair met and it is unclear whether she has been married before.

The palace did not respond to requests for comment on the photos or reports of a marriage.

Previous newspaper reports shown Oksana on a reality TV show taking part in a steamy scene in a swimming pool.

Pro-Kremlin newspaper Komosomolskaya Pravda reported the ‘royal wife’ clutched a Champagne glass as she “surprised the participants of a reality show by having sex on her first date”.

The New Straits Times reported there had been tensions between the palace and the government of Prime Minister Mahathir Mohamad, who led the opposition to an election win in May.

This marks the first time a Malaysian monarch has quit before completing their five-year term since the country gained independence from the UK 60 years ago.