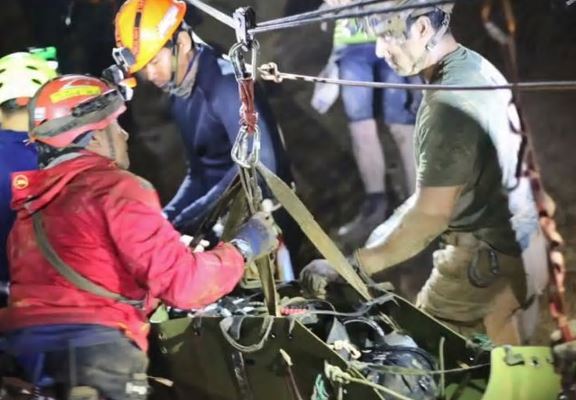 It was the story that gripped the world: twelve boys from a Thai soccer team and their coach were trapped in a flooded cave so deep under ground a rescue was almost impossible.

Then, as the world waited along with the boys’ anxious families, a brave yet difficult plan was hatched to bring the members of the Wild Boars team out alive.

It would take skilled divers from countries including Australia and even then success was not guaranteed. Days were needed to bring out the boys and there was no guarantee all of them would make it out alive.

Graphics and maps were produced of how the boys dressed in wetsuits and flippers would swim in a buddy system tethered to expert divers up and down the treacherous subterranean labyrinth to the surface.

The boys parents were told their sons would be swimming to safety and in the global joy which erupted after the last of the boys surfaced safe and alive, no-one questioned the method of their extraction.

One of the boys is moved on a stretcher during the rescue operation of the Thai Wild Boars soccer team in July last year.Source:AFP

A new book reveals that far from ‘swimming’ out, the boys were drugged with ketamine and handcuffed behind their backs.Source:AFP

All 12 of the Thai cave boys (above in hospital) recovered, but they were cuffed and drugged because of the risk they would rip off their masks during the rescue.Source:Supplied

Wild Boars’ coach Ekapol Chanthawong and the boys who were rescued after being trapped in a flooded Thai cave.Source:Supplied

But ABC Australia Southeast Asia correspondent Liam Cochrane says in his new book, The Cave, the boys were in fact drugged with ketamine and handcuffed on their journey out of the cave.

The boys received far stronger drugs, and they were handcuffed behind their backs to stop them ripping off their face mask should they wake up.

“To calm nerves, the parents were told the boys were being taught how to dive and the media reported that each of them would be tethered to an air hose and then swim out with one rescue diver in front and another behind,” Cochrane writes in his book.

“Those who’d been inside the flooded tunnels knew there was no way a child who had never dived before could make it through the muddy and treacherous obstacle course.

“The only hope was to sedate them, put oxygen-fed masks with silicone seals over their faces and let the expert cave divers carry them out.

“But it was crucial that the masks fitted tightly, otherwise they might drown.”

An image of the boys deep underground after 10 days cut off from the outside world, and before a rescue was hatched.Source:Supplied

A new book on the Thai cave boys reveals the truth about how caving experts including two Australians brought the boys home.Source:Supplied

The 12 Thai boys who were trapped in a cave for more than two weeks say they tried to dig their way out before their ‘miracle’ escape. The ‘Wild Boars’ and their football coach spoke publicly for the first time after doctors ruled they’d recovered enough boy physically and mentally to be released from hospital. The youngsters also paid tribute to Samarn Kunan, the Thai Navy SEAL who died while laying oxygen tanks along a potential exit route.

Cochrane writes that among the many full-face masks procured for the rescue, only four were small enough to fit the boys and even these were likely too big for the smallest.”

He was given a sedative to swallow, then injected in each leg with ketamine by Australian cave diver, Dr Richard Harris, an anaesthetist known as Dr Harry, until he fell into unconsciousness.

Note was placed into his diving suit, had an air tank strapped to his chest, and a small full-face mask fitted.

Within half a minute Note began to breathe normally and the divers handcuffed him, tying cable ties around his wrists and clipping them behind his back.

Relatives celebrate as another member of the Wild Boars is extracted from the flooded Thai cave. Picture: Lillian Suwanrumpha.Source:AFP

Some of the rescued Wild Boars and a Thai Navy SEAL at their first press conference after the rescue. Picture: Linh Pham.Source:Getty Images

“This was to ensure that if he did wake up from his ketamine slumber, he wouldn’t try to rip off his face mask, endangering both his life and that of his rescuer,” Cochrane writes.

He describes Note’s rescue as being held by a harness strap on his back by one of the expert divers and submerged, “in roughly the same position as a strapped-together tandem skydiver and instructor”.

Note was taken through the first flooded chamber like this, then brought to the surface where he was medically checked.

He was then taken again underwater in the tandem position for the next flooded chamber.

“The two biggest dangers underwater were the boy waking up and panicking, or his mask leaking and turning that plastic and silicone bubble of life over his face into a death trap,” Cochrane writes.

“Preventing the mask from becoming dislodged was a constant concern.”

The rescue was slow, difficult and physically challenging for the rescue divers, but it worked.

Note was hauled onto dry land, checked by doctors and deemed okay.

One down, twelve boys and a coach to go.

Shake Shack’s Danny Meyer changed the restaurant industry by breaking all the rules. Here’s how. To more trip-expert.com