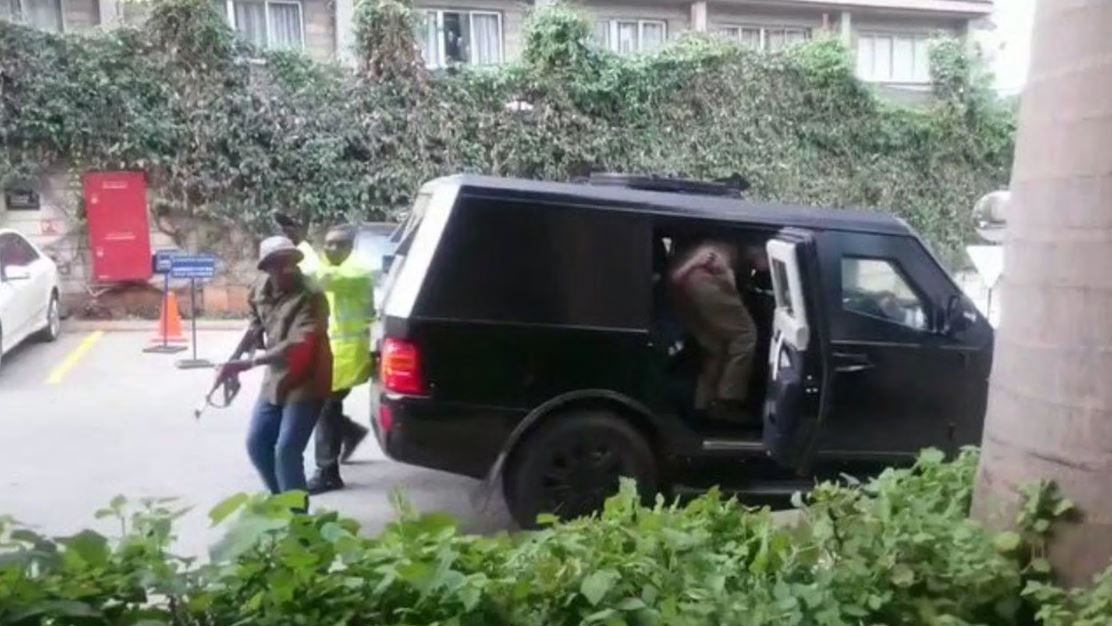 An Australian caught up in a terror attack in Nairobi has revealed how he ran for his life through the hotel and office complex where extremists were unleashing explosions and gunfire.

Simon Crump, who works for a public relations company, barricaded himself inside his office with his colleagues.

“We have no idea what is happening. Gunshots are coming from multiple directions,” Mr Crump told AFP at the time of the attack.

Mr Crump was among a first wave of people evacuated from the office buildings surrounding the upmarket Dusit hotel complex in Nairobi, after an hour of sustained gunfire.

He said they took a “slow and strategic route” through the compound to avoid being shot because the terrorists were still at large.

He later told the ABC he initially feared the Australian High Commission, which he can see from his office, was under attack.

“We were focused on getting out of there alive, being acutely aware that there were active shooters throughout the compound that we could potentially come under fire from,” he told the ABC.

In this still taken from security camera footage an armed attacker walks in the compound of the hotel. Picture: APSource:AP

Security forces help civilians flee the scene as cars burn behind, at a hotel complex in Nairobi. Picture: APSource:AP

Mr Crump praised the efforts of security personnel who escorted them to safety.

“The people that we were with were very much in control and in many ways, while it’s a stressful situation, you had reassurance that these people were focused on making sure you get out alive.”

At least 15 people died in the attack, Kenyan police sources said on Wednesday, as fresh explosions and gunfire rang out in the siege which stretched into its second day.

Security forces worked throughout the night to secure the DusitD2 compound, which includes a 101-room hotel, spa, restaurant and office buildings, after an attack claimed by Al-Shabaab Islamists on Tuesday afternoon.

At least one suicide bomber blew himself up at the hotel while gunmen sprayed fire before engaging security forces and holing themselves up at the premises as civilians fled or barricaded themselves in their offices awaiting rescue.

“We have 15 people dead as of now and that includes foreigners,” a police source told AFP on condition of anonymity.

The Dusit D2 hotel complex, where the terror attack was carried out. Picture: Google MapsSource:Supplied

Among the dead was an American citizen, a State Department official said. A second police source confirmed the toll but warned “there are areas not yet accessed but that’s what we know so far.” After 12 hours trapped inside the complex, a group of dozens of people was freed, according to an AFP journalist at the scene, followed by fresh gunfire and a detonation.

“We still believe there are two or three attackers in specific locations,” the first police officer said. “The situation is far from over.” The second police officer said that at one point they had been sure the attackers had been neutralised after a long period without shooting, however gunfire resumed again after 2am.

Further explosions and gunfire were heard shortly before dawn, with no official word on how many people were still trapped inside.

“There is a floor where they are shooting from, we still believe there are people there,” he said, after reports that a large number of people had fled upstairs.

Civilians flee through a window at a hotel complex in Nairobi, Kenya. Picture: APSource:AP

Kenyan police chief Joseph Boinnet said the attack began with an explosion targeting three cars in the carpark and a suicide bombing in the foyer of the Dusit hotel.

As the explosion and gunfire rang out in the leafy Westlands suburb, hundreds of terrified office workers barricaded themselves in the complex while some fled.

A number of heavily-armed foreign forces, who appeared to be from embassies based in Nairobi, were at the scene alongside Kenyan security officers.

One survivor rescued from the building told a local television station the attackers were “very confident; they were people who knew what they were doing”.

CCTV footage broadcast on television showed four attackers, clad all in black and heavily armed, entering a courtyard in the compound at the start of the assault.

‘A FLASH AND A BANG’

John Maingi said there had been “a flash of lights and a loud bang” at the Secret Garden restaurant where he works.

“When I peeped outside I saw a human leg which has been cut off. We hid in the room and then some police officers rescued us,” he said.

In this grab taken from security camera footage, heavily armed attackers walk in the compound of the hotel. Picture: APSource:AP

Reuben Kimani, a barista who was rescued after several hours trapped inside the hotel, said he recognised one of the attackers as a client.

“I knew one of them because he had a big scar on one of his hands,” he said. “I saw them. They shot six of my friends, four didn’t die but two succumbed.”

The attack was claimed by the Al-Qaeda-linked Somali group Al-Shabaab, which has repeatedly targeted Kenya since it sent its army into Somalia in October 2011 to fight the jihadist group.

The attack at DusitD2 is the first in Nairobi since gunmen stormed the city’s Westgate shopping mall in 2013, killing at least 67 people.

On April 2, 2015, another Shabaab attack killed 148 people at the university in Garissa, eastern Kenya.

The Westgate attack resulted in many upscale establishments and shopping centres in the capital — including the Dusit —putting up strict security barriers to check cars and pedestrians.

Several Nairobi establishments popular with Westerners announced on social media Tuesday that they had closed for security reasons.

In its statement, the group noted the attack came exactly three years after its fighters overran a Kenyan military base in Somalia.

“This attack on Nairobi hotel came as Kenyans and their media are commemorating (the) El Adde attack,” it said.

Australian High Comissioner to Kenya, Tanzania, Uganda and Rwanda is yet to personally post anything about the attack on Twitter, but re-tweeted a Smart Traveller warning earlier today.

“#Nairobi. On 15 January 2019, an attack occurred at the DusitD2 hotel complex in Nairobi. Pay close attention to your personal security at all times and be alert to possible new security risks,” it read.

Al-Shabab asserted that 47 people were killed but its Shahada news agency post gave no details.

An injured man is evacuated from the scene of an explosion at a hotel complex in Nairobi’s Westlands suburb. Picture: AFPSource:AFP

An injured woman is evacuated from the scene of an explosion at a hotel complex in Nairobi’s Westlands suburb. Picture: Simon Maina/AFPSource:AFP

The attack immediately reminded many Kenyans of the Westgate Mall attack in Nairobi in 2013, when al-Shabaab extremists burst into the luxury shopping centre, hurling grenades and starting a days-long siege that left 67 people dead.

Much like the siege of 2013, this one appeared aimed at wealthy Kenyans and foreigners living in the county, and came a day after a magistrate ruled that three men must stand trial in connection with the terror incident.

Al-Shabaab has vowed retribution against Kenya for sending troops to Somalia since 2011. The al-Qaeda-linked group has killed hundreds of people in Kenya.

In 2015, al-Shabaab claimed responsibility for an attack on Kenya’s Garissa University that killed 147 people, mostly students.

Tuesday’s violence also came three years to the day after al-Shabab extremists attacked a Kenyan military base in Somalia, killing scores of people.

Despite the repeated attacks, the Kenya-Somalia border remains porous, with al-Shabaab extremists able to easily bribe their way across, according to a United Nations panel.

What is the capital city of the Middle East. >>> menamap.com