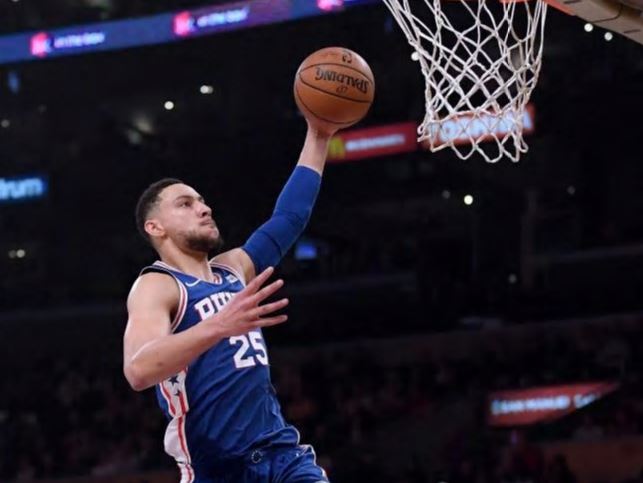 NBA superstar Ben Simmons has achieved something no other Australian has been able to match — being named an NBA All-Star.
After weeks of voting, Simmons finished equal third with Miami Heat veteran Dwyane Wade, missing a starting role and meaning his fate came down to the NBA head coaches to select him as a reserve.
The coaches have spoken with the team announced today and Simmons picked to make his All-Star debut.

The 22-year-old Aussie was snubbed last year despite putting up incredible numbers and winning the NBA rookie of the year award.
The coaches voted for seven players in their respective conferences — two guards, three frontcourt players and two additional players at either position group.
Simmons joins Sixers teammate Joel Embiid, who was named an All-Star starter for the second straight season, but fellow teammate Jimmy Butler missed out for the first time in five seasons, although Butler could still be picked to replace the injured Victor Oladipo according to ESPN’s Adrian Wojnarowski.

The other Eastern reserves are Victor Oladipo, Kyle Lowry, Blake Griffin, Khris Middleton, Bradley Beal and Nikola Vucevic.
The Western Conference reserves are Russell Westbrook, Anthony Davis, Nikola Jokic, Damian Lillard, Klay Thompson, LaMarcus Aldridge and Karl-Anthony Towns.
The starters announced in mid-January were Kyrie Irving, Kemba Walker, Kawhi Leonard, Giannis Antetokounmpo and Embiid from the East, and Stephen Curry, James Harden, Kevin Durant, Paul George and LeBron James in the West.
Simmons has been in hot form this season, recording eight triple-doubles, good for first in the Eastern Conference and tied with Denver’s Jokic for second in the NBA behind only Oklahoma City’s Westbrook.
Simmons recently notched his 20th career triple-double in his 129th NBA game, second behind only Hall of Famer Oscar Robertson, who did so in just 45 appearances.

At 22, Ben Simmons has achieved plenty already in his NBA career.Source:AP
Simmons isn’t too far off a triple-double average for his career with 16.1 points, 8.6 rebounds and 8.2 assists per game.
This season, he’s going at 16.7 points, 9.5 rebounds and 8.2 assists per game.
Speaking to news.com.au earlier this month, the Melbourne-born superstar said he is proud to represent Australia on the international stage every time he plays.
“Support from Australia means everything because just being Australian, every time I put on a jersey, I know I’m not only representing my family, but Australia at the same time,” Simmons told news.com.au.
“I also want to be the first Australian to be in the All-Star game, I think that would just be huge for Australian basketball. Not only for me but for little kids looking up to me. I think that would just be an amazing accomplishment.”
NBA stars, including his potential All-Star captain LeBron James, celebrated the achievement.

The 76ers trumpeted the monumental achievement reserved for the best of the best in the NBA.

Earlier this week, Simmons was also named in the World Team for the Rising Stars Challenge.
The team of international stars will take on some US-bred talent at the All-Star weekend next month.
Atlanta Rookie of the Year candidate Luka Doncic, from Slovenia, and Serbian star Bogdan Bogdanovic of the Sacramento Kings will also share the floor with Simmons in that match.
Los Angeles Lakers stars Kyle Kuzman and Lonzo Ball will front up for the American side which also features Utah sensation Donovan Mitchell, Jayson Tatum from Boston and the Kings’ De’Aaron Fox.

NBA All-Star Ben Simmons has a nice ring to it.Source:AFP
Last year Simmons guided Team World to a win over the locals, showing off his classy passing game and finishing with a double-double. His side won 155-124 and the Philadelphia star contributed 11 points, six rebounds, 13 assists and four steals in the victory.
The next step for Simmons will be the team selection.
Eastern Conference captain, the Milwaukee Bucks’ Antetokounmpo and Western Conference captain James of the Lakers will pick their final teams.
This year’s All-Star game will see players picked to teams regardless of their teams’ conference affiliation.
Enjoy selected NBA games live and on demand on Kayo Sports. More than 50 sports are available for streaming from just $25 per month for two devices at once.