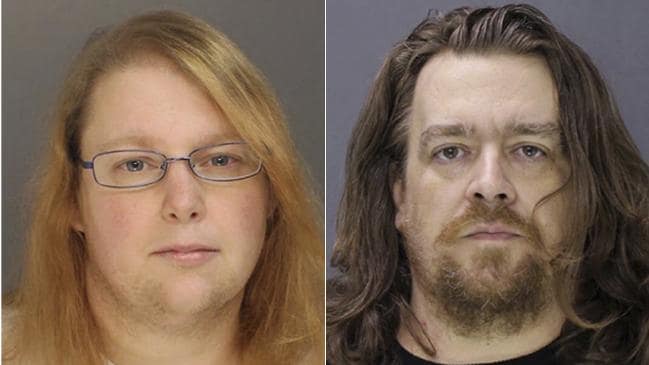 Mother let her boyfriend rape and murder her adopted daughter as part of sick, twisted fantasy

A man in the United States has pleaded guilty to raping and murdering a 14-year-old girl before dismembering her body, as part of a sick fantasy that her adoptive mother supported.
Jacob Sullivan, 46, pleaded guilty to all charges in the 2016 death of teenage Grace Packer.
A jury outside the state of Pennsylvania will now determine a sentence of either life in prison or death.
The young victim’s adoptive mother, Sara Packer, also agreed to plead guilty and serve a life sentence for allowing Sullivan, her boyfriend, act out a disgusting rape-murder fantasy.
Packer, 44, is expected to testify against Sullivan during the penalty phase of his trial.
Prosecutors said the woman, a former foster parent and county adoptions supervisor, watched Sullivan act out a rape-murder fantasy they shared.
Authorities said Sullivan beat and raped Grace, and she was bound, gagged and left to die in a sweltering attic. Returning the next day and finding Grace was still alive, Sullivan strangled her, court documents said.

Sara Packer and Jacob Sullivan have both pleaded guilty to the murder of Grace Packer, her adopted 14-year-old daughter. Picture: APSource:AP
The couple stored her body in cat litter for months, then hacked it up and dumped it in a remote area.
Her remains were discovered by hunters in October 2016.
Grace’s death raised questions about whether child welfare agencies could have done more to protect her.
Packer and her husband at the time, David Packer, cared for dozens of foster children before David was arrested in 2010 and sent to prison for sexually assaulting Grace and a 15-year-old foster daughter at their home in Allentown, about an hour north of Philadelphia.She lost her job as a Northampton County adoptions supervisor in 2010 and was barred from taking in any more foster children.
The Pennsylvania Department of Human Services launched an investigation after Grace Packer’s murder but its findings have not been made public.Sullivan’s plea hearing on Tuesday was interrupted Tuesday after he fell ill and was taken to a hospital. The hearing is scheduled to resume Wednesday.
His lawyer had said Packer masterminded the killing. He entered his plea as jury selection was about to get underway.
Packer’s trial was expected to begin next month.

Troubling or not, Penn show is a treat. To know more lovekiev.com