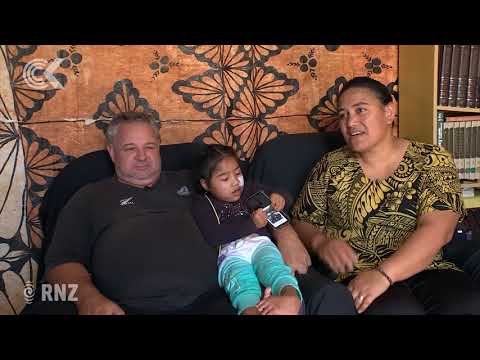 Four-year-old Jeanette Queensell-Logan was born with a heart condition, but it was a series of failures by doctors for nearly two years that resulted in her having a heart attack and subsequent brain injury.

Jeanette’s dad Stephen Logan said many of Jeanette’s achievements to date – her movement and communication – were milestones they were not sure she would reach.

“She was brought home on palliative care – they weren’t expecting her to live very long after the incident.”

In the two years since her heart attack, Jeanette has been using a wheelchair and re-learning how to move and communicate.

She lives with her parents and four older siblings at their three-bedroom, one bathroom Glen Eden home – but as her needs grow, it’s becoming more of a squeeze.

Jeanette still sleeps in the same bed as her parents and Mr Logan said bath times and other basic tasks were a struggle.

“She needs her own room, bathroom, an area to be changed properly in, we need hoists and stuff, that’s the big stuff,” he said.

Because Jeanette’s condition is the result of a medical injury, she has ACC funding to help cover her equipment and care costs.

ACC has agreed to pay for some modifications to the house – including a new bedroom for Jeanette, a room for her carer, an accessible bathroom, and a storage area for her equipment.

But under its proposed plans, that area would be built on top of a new garage, isolated from the house, and separated by a deck.

Mr Logan said that was not acceptable – he wants the existing home extended, so Jeanette was part of the family unit – and didn’t have to venture outside during the cold and wet winter months.

But ACC isn’t willing to pay for Mr Logan’s proposed plans – the agency said the extensions he wants aren’t related to Jeanette’s injury.

The two parties have been at an impasse for the past 14 months or so – and Mr Logan said it was taking its toll on the family.

“The way we look at it is, our family is trying to be ripped apart, through her separation from the family.”

Jeanette’s mum Mele Logan said she refuses to have her daughter isolated from her loved ones.

“We don’t want to separate her, we don’t want a stigma in her that she’s going to feel later in life, that she’s a burden. For me, she’s a part of our family and we want to be with her.

“She’s not a figure and numbers for us, and we’re not only looking out for her life in five years’ time because if we can’t fight for her, no one does and she can’t,” she said.

Mr Logan said they didn’t have the exact figures for how much the renovations would cost – but that ACC had mentioned figures ranging from $500,000 to $1.2 million.

No one from the agency was available to be interviewed for this story but in a statement reiterated that the Logan family would need to cover any modifications unrelated to Jeanette’s injury.