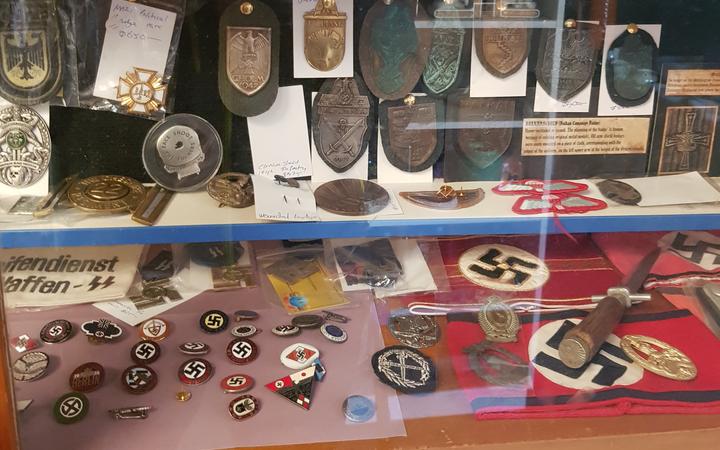 Concerns about the store’s war memorabilia have been raised following the attacks last month.

But Barry White, who owns Trash Converters in the small town of Palmerston, said he sells the items because of the interest in them, just as he does with memorabilia relating to other actors in the war.

“It’s just what people seem to want. It started small and got bigger and bigger.”

Mr White does not think his Nazi items were any more prominent than other war memorabilia.

But an Otago man, who only wanted to be identified as James, disagreed.

During a recent trip through the town he went to the shop and was shocked by what confronted him.

“I initially saw a couple of swastikas and thought ‘That’s weird’, but then when I stood back I saw the whole cabinet was just full of swastikas.

“It was a little bit more than just ‘I’m just selling swastikas’. It had that element of shrine.” SS and Swastika symbols at the shop. Photo: Supplied

James said he was not easily shocked, but he found the display “disturbing”.

Mr White responded to the concerns by saying “they need to grow up”, though he conceded it was not the first time issues had been raised.

“I’ve had a few people say ‘ohhhh it’s, it’s’. But I say ‘Think about it. Stalin killed more people than Hitler so what are you on about’ and they go back and think about it ‘Oh, I never thought about it that way’,” he said.

The Christchurch terror attacks had not changed his view on whether such items were appropriate.

“That was nothing to do with Germany or Nazism at all,” Mr White said.

“That was just some dopey, flipping Australian.”

His store had been visited by veterans on Anzac Day and they were unconcerned by the memorabilia, he said.

“If we don’t sell it we’ll forget. It’s all history.

“I get a few of the old people, especially on Anzac Day, that call in and they haven’t got a problem with it.”

Dunedin RSA’s president, Lox Kellas – a veteran of the Vietnam War, who retired last year from the police after serving for more than four decades – said there was no place in society for neo-Nazis or Nazi sympathisers.

“I think the line has to be drawn and I think there’s a place for genuine collectors but there’s no place for those people that want to replicate what it stood for,” he said.

“To wear that brazenly is a kick in the teeth for the men who went and served.”

The terror attacks had started a conversation about what was and was not appropriate, and that could only be a good thing, Mr Kellas said. But TradeMe had already drawn a line in the sand and banned a wide array of items including Nazi uniforms, weapons and medals or anything owned by Nazi leaders from ranging Hitler to Heydrich.

TradeMe head of trust & safety George Hiotakis said the company had held that stance for several years and was proud of it.

“It’s a stance that we feel reflects us and it’s a stance we think our member community would be happy to be alongside with,” he said.

“The reality for us is even before Christchurch, TradeMe had quite a firm position that we don’t allow any hateful or intolerant ideologies to be promoted. We don’t want to be part of anything like that.”

Such items were also banned from sale in many parts of the world.

International Muslim Association of New Zealand president Tahir Nawaz said he supported TradeMe’s stance and thought the government should look at the rules used in other parts of the world.

“I think it’s a good initiative from TradeMe and I think we should keep our standards high in New Zealand. I think the government should seriously considering banning them from shops as well.

“If there’s something we know is going to be definitely used in a museum or collection that is a different story. But this shouldn’t be allowed to be sold by any other shop – like a $2 shop or a recycling shop – any shop. There shouldn’t be anything like this allowed.”

TradeMe’s offensive items standards were currently under review – as they were annually – and changes were possible in light of last month’s terror attacks.