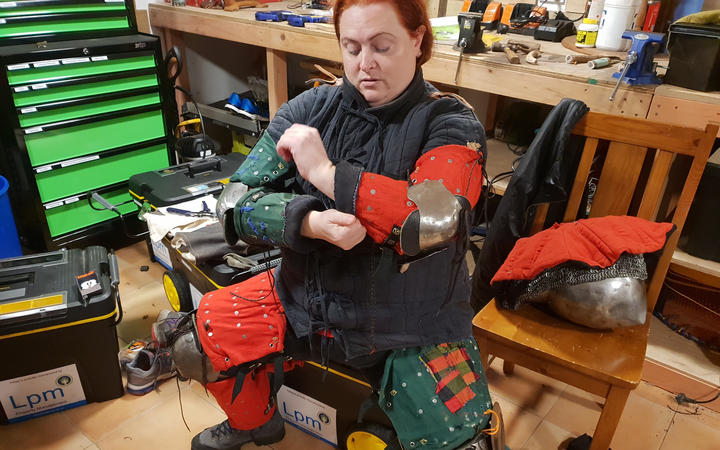 Hidden away from the streets of Wellington, surrounded by 100-year-old houses, is a medieval fighting pit where a handful of armour-clad warriors clash twice a week.

This backyard in Newtown is home to the Felag Club, and some of its members are preparing to take on the world’s best medieval fighters in Serbia and the Ukraine next month.

“Putting on the armour and doing the weapons, it ain’t as easy as it looks in the movies and things,” Ms Berghan-Whyman said.

Her well-loved kit, which has been patched and stitched together in places, will be replaced with a new suit of armour that has been handmade in the Ukraine.

“With armour everything’s bespoke, and now, with my weapons that is bespoke as well and being a woman, my hands are smaller than the chaps so when they can go off and buy things, for me the diameter is not quite right and I find things slip out of my grasp.”

While the titanium armour takes some of the weight off her shoulders, coming in at 15kg less than her current 35kg steel armour, it will cost  $4000.

She trains most days, but is tight-lipped about her exact training programme as to not give too much away to her opponents.

“For me, I mean you can probably guess that being a heavier woman my first strength is that I can pack a punch.

“But there’s got to be an opportunity cost and that’s usually cardio, so I will never chase a lighter competitor around because she’s just going to out-cardio me.”

It’s not just preparations on the battlefield though, as you can imagine, getting 2m axes through customs requires months and a lot of paperwork.

“We never say weapons, we say sports equipment … but also, we pay for excess baggage because while I’m wearing titanium and kevlar, it’s bulky and it’s oddly-shaped and airlines don’t like that.”

One of this years’ highlights will be the Grand Melee – 150 fighters verses 150 fighters, which is the first time this has ever been attempted. Typically, fighters compete in small teams, or one on one.

During a round, fighters earn points each time the metal hitting the metal makes a loud ringing sound.

“Your vision is just getting shocked from the impacts on the side of your head, you have a moment where you can’t see clearly all the time and you try and throw your own things as well and feeling the strikes … [it’s like] getting smashed in the side of the head with a huge object, sometimes you can smell ozone inside of the helmet from the force of the blow,” Felag club member Justin Harris said.

He will also represent the club at the two international competitions, which will be the 10th time he has attended, having previously won a silver medal in the long-sword category in the one-on-on category at the IMCF.

The online publishers  is a powerful online network and infrastructure