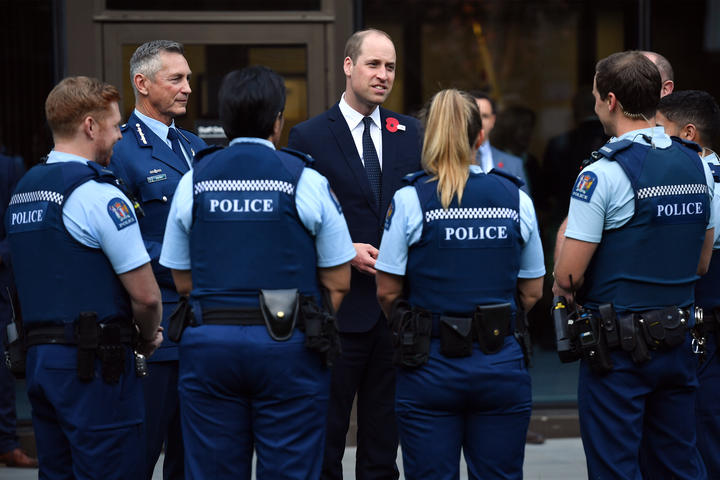 Prince William has met some of the first responders to last month’s mosque attacks, during a brief, high-security visit to Christchurch’s Justice Precinct this afternoon.

St John paramedics and police staff are among those who greeted the Duke of Cambridge at 4pm.

Prince William is visiting several locations in Christchurch today and tomorrow, to pay his respects after the mosque attacks.

The prince is travelling on behalf of the Queen at the request of Prime Minister Jacinda Ardern.

At his first meeting in Christchurch this afternoon, royal fans and a large media contingent waited on the street outside the Justice Precinct, where armed guards stood watch.

But the prince was escorted quietly through a back entrance – and was only visible briefly through a window.

Once inside the building he met with police and ambulance personnel, and then senior representatives including the Police Commissioner Mike Bush and Superintendent District Commander John Price.

During the visit, Prince William asked officers and medics about how they had put their training into practice. “Nothing really trains you for seeing it in real life”, concluded the duke, who spent time as a pilot with the air ambulance service in East Anglia.

“I’m sure the team pulls together,” he said.

Ms Ardern said the prince’s visit would “bring comfort” as the duke had a “close connection” with New Zealand and Christchurch in particular.

“His visit provides the opportunity to pay tribute to those affected by the mosque terrorist attacks and show support to the local and national community,” she said. William offered prayers for the Christchurch community and described the attacks as a “cruel nightmare”.

Tomorrow he will meet with survivors of the mosque attacks, and carry out a central city walkabout in the afternoon which the public can attend.

It is not the first time that the duke has visited Christchurch in the wake of a tragedy.

In 2011, he attended a memorial service after an earthquake killed 185 people.

In a speech that day, he said: “My grandmother once said that grief is the price we pay for love. Here today, we love and we grieve.”

The Duke of Cambridge’s two-day visit began in Auckland this morning with a service for Anzac Day where he laid a wreath of remembrance in front of the War Memorial Museum on behalf of the Queen but did not speak at the service.