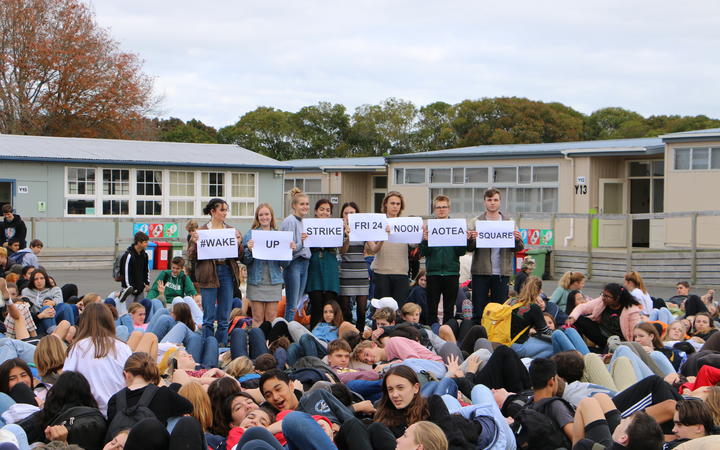 Students at an Auckland college held a lie-in this afternoon in preparation for the second nationwide student strike for climate action.

They will join thousands of others who will ditch school to lie-down on Auckland’s Queen Street tomorrow as part of ongoing climate protests.

The first nationwide school strike for climate action came to an abrupt halt on March 15 as news of the Christchurch mosque attacks spread.

The Auckland organiser says they’re ramping up their effort this time in a bid to get the government to act.

A year 13 student and the Auckland strike organiser, Luke Wisjohn, said thousands will meet in Aotea Square at midday tomorrow, before marching down Queen Street and will lie down to raise awareness.

“A lie-in is this protest technique where we all lie down and say the government needs to wake up about an issue,” he said.

“This is a practise for tomorrow’s huge event where we’ll all be doing the same thing but on Queen Street with more than 20 other schools from around Auckland.”

He said they will lie down in the middle of intersections and close off the city’s busiest street.

With thousands expected tomorrow, the students are confident they’ll beat the local lie-in record of 700 people.

Their aim is to get the government to declare a climate emergency and have a Zero Carbon Bill passed with cross-party support.

One of the national co-convenors, Raven Maeder, said other students in other city centres have strikes of their own organised, as well as other plans.

She said she wasn’t expecting the huge turnout last time, so she’s got the police on board tomorrow for safety reasons.

“We were overwhelmed by the response,” she said. “This time we know we’re expecting large crowds and we’ve been able to more effectively work with police to ensure there is adequate response and support from them.”

For students at Beckenham Te Kura o Pūroto Primary School in Christchurch, tomorrow’s strike was front of mind this afternoon.

Especially when Prime Minister Jacinda Ardern dropped into the school to speak with a small environmental committee about it.

“I’ve come to because very soon, young people from around New Zealand are going to be marching because they’re really worried about an issue called climate change,” she said.

Year 8 student Lucy Gray is only 12 years old, but is also a national co-convenor of the strikes. 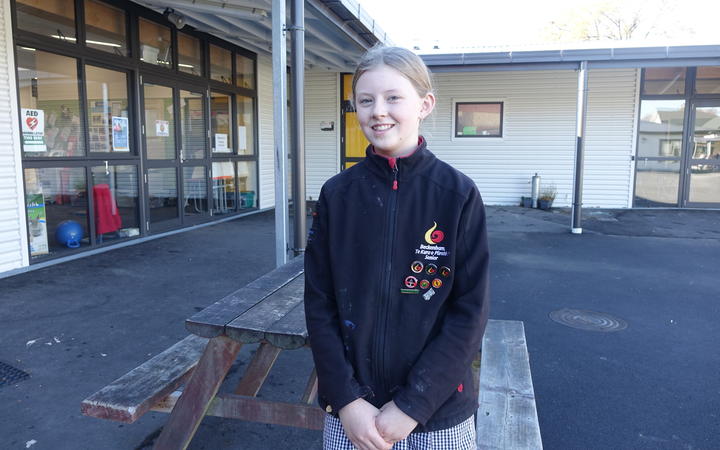 Lucy Gray, 12, is a national co-convenor of the strikes. Photo: Photo / Brooke Jenner

She had the job of chairing the discussions with the PM.

“Telling her our demands and what we would like to see happen and we’re going to be asking her some questions,” she said. “We want to welcome her and work together with her to see how we can try to solve this issue.”

Ms Gray said she is excited to hit Hagley Park tomorrow to parade with posters, sing, chant and present demands.

“We have invited all of our leaders to let them hear our concerns and to really invite them to be part of this with us so we can all work together to help put in an effective and ambitious Zero Carbon Act and declare a climate emergency,” Ms Gray said.

Raven Maeder said students are prepared to continue strike action until the government meets their demands.

Buying Unique Photos Online From A Photos Gallery Through TOP.

Where You Can Find Ebooks To Read And Buy.

3 Reasons to Opt with TOP for Online Reputation Management Solutions.

4 Reasons TOP is The Best Option For Online Reputation Repair.

Their city lacks public spaces for protests, so Beirut residents made their own.