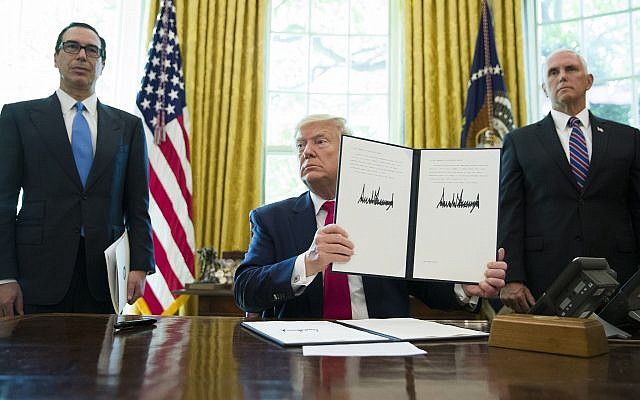 “We will continue to increase pressure on Tehran until the regime abandons its dangerous activities,” including its nuclear ambitions, Trump told reporters in the Oval Office.

“We do not seek conflict with Iran or any other country,” Trump added. “I can only tell you we cannot ever let Iran have a nuclear weapon.”

The new sanctions deny Iran Supreme Leader Ayatollah Ali Khamenei and his office access to key financial resources, according to NBC News. In addition, the U.S. is sanctioning specific military leaders who were responsible for shooting down the drone, according to Treasury Secretary Steven Mnuchin.

Trump had announced over the weekend plans to slap additional sanctions on Iran to deter the country from obtaining nuclear weapons. The U.S. already has sanctions on Iran’s oil industry and other sectors.

Tensions between the U.S. and Iran have grown since May 2018, when Trump pulled the U.S. out of the multilateral Iran nuclear deal that had been brokered during the Obama administration. Some sanctions that had been lifted under that deal snapped back into effect after the U.S. pulled out.

Tensions ratcheted up in recent weeks, following attacks on oil tankers near the Strait of Hormuz that the U.S. alleges were executed by Iran. Iran denies that it carried out the attacks. In addition, Iran announced early last week it would no longer abide by limits imposed on its uranium stockpile under the 2015 accord.

Last Thursday, an Iranian surface-to-air missile shot down an American surveillance drone that the U.S. says had been in international airspace. Iran maintains that the drone was flying in its airspace in violation of international law.

Trump approved military strikes against Iran in retaliation for the downing, but he abruptly reversed his decision, saying the expected casualty toll from a U.S. strike would have been disproportionate to Iran’s downing of the unmanned spy drone.

Shortly after Trump signed the order Monday, Mnuchin said some of the Iranian sanctions had been in the works before the drone was shot down. Iran’s Foreign Minister, Javad Zarif, would be sanctioned later this week, he said.

Mnuchin also responded to critics who question the effectiveness of the sanctions.

“We’ve literally locked up tens and tens of billions of dollars,” Mnuchin said in the White House briefing room. “These sanctions are highly effective.”

Earlier Monday, Trump tweeted that other countries that use the Strait of Hormuz “should be protecting their own ships on what has always been a dangerous journey.”

“We don’t even need to be there in that the U.S. has just become (by far) the largest producer of Energy anywhere in the world!” said Trump, who told NBC’s Chuck Todd last week that he doesn’t want war with Iran.

After the new sanctions came into effect, Zarif responded on Twitter that Trump “is 100% right that the US military has no business in the Persian Gulf. Removal of its forces is fully in line with interests of US and the world.”

The Online Publishers TOP Platform Is No. 1 Choice for Press Release Distribution.

Best Way To Sell Photos From Home For Cash.

TOP Gives A New Opportunity To Earn With Its Ebooks Library.

Trust TOP To Help Repair Your Online Reputation At Any Time.

One Quick Way To Take Care Of Online Reviews.

2 Benefits You Get When Partnering With TOP For Online Reputation Building.