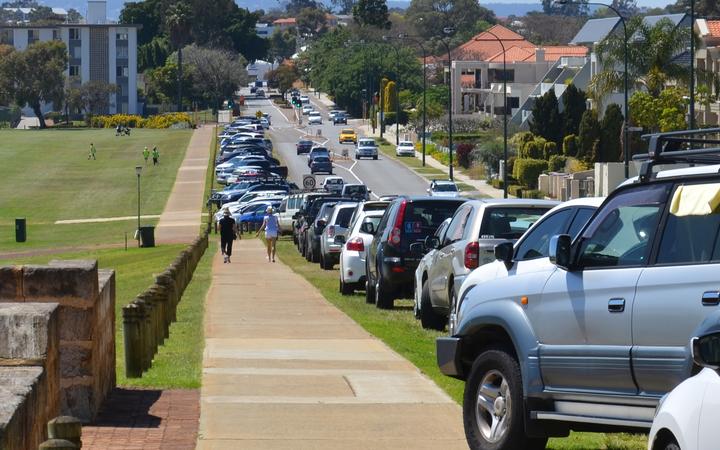 Council parking fine plan opens a can of berms

If you park on a narrow street with two wheels up on the berm, a new proposal could enable councils to hit you with a $40 fine.

The proposed rule would apply even if there was no ‘no parking’ sign nearby.

Waitemata Local Board chairperson Pippa Coom, with the support of Auckland Council, is heading to the Local Government New Zealand conference in Wellington this weekend to try and get all the country’s councils on board so they can lobby central government to introduce a blanket ban on parking on the grass verge, or berm.

Currently, it is technically illegal to park on berms, but because there are not enough ‘no parking’ signs, there are many places where it’s not enforceable.

Ms Coom said an outright berm parking ban was a far more simple option and was hoping the country’s councils could form a unified front to lobby central government.

“Berms are part of the footpath and I think most people would presume that you can’t park on them anyway.

“So what we’re looking for is just to clarify the rules so we don’t have this anomaly where you need to have signage up to confirm that you can’t park on the berm, because there’s a lot of reasons not to park on the footpath.”

The rules would have to be changed by the New Zealand Transport Agency.

Ms Coom said she did not want to see a crack-down on drivers who parked on berms, but for the rules to be in place in case there’s a complaint and action needed to be taken.

“What we want to discourage is people as a matter of course … looking for free parking and using the berms and damaging them because the rules are ambiguous.”

Automobile Association principal advisor Mark Stockdale said if a new law was introduced it would catch a lot of people out, because berm parking was a common practice.

“Whether that’s on some suburban streets that are quite narrow with people trying to get their car off the road so they’re not restricting traffic.

“A blanket ban would really fly in the face of what a lot of Kiwis do and we think is something that actually should be dealt with on a case-by-case basis.”

If people were causing problems by parking on a particular berm, the council should just put a sign up there, Mr Stockdale said.

He said New Zealanders were fond of their berms and did not want it to be up to the council to say what was and was not allowed on them.

“In many cases, the property owners are maintaining their berm like it’s part of their property even though it isn’t – they’re maintaining it on behalf of the council, they’re mowing the berm.

“And that kind of confers property rights and that’s why people do use those berms. So we need to think of the ways that people behave and having a blanket ban flies in the face of what people do.”

In 2013, “Bermgate” became one of the most popular stories of the year when Auckland Council moved to make residents mow their own berms rather than the council.

“Developing your blog is a balancing act between appeasing current readers and reaching out to new ones.” ― Scribendi – Subscribe with THE ONLINE PUBLISHERS to offer your services as a blogger.

Getting Paid For Starting As An Online Reviewer.

Earn For Photos By Signing Up With TOP To know more >> https://topphotosgallery.com/ .

Find One Of The Best Ebooks Libraries With TOP

The rise of superbugs: Facing the antibiotic resistance crisis.

5 Tips to Keep Your Nails Strong.