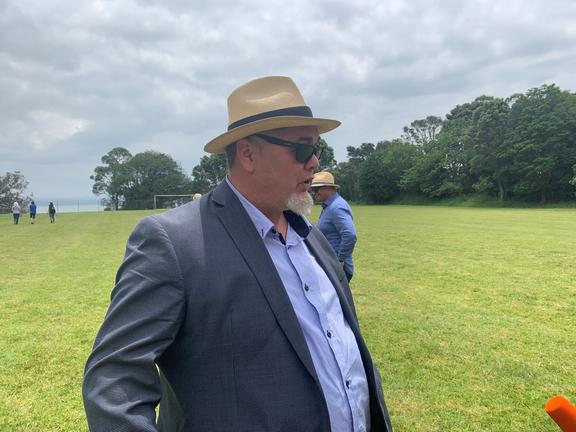 Protesters at a public hui today in Auckland cursed mana whenua of the ancestral maunga, Ōwairaka, telling them they were colonisers and questioning their whakapapa. 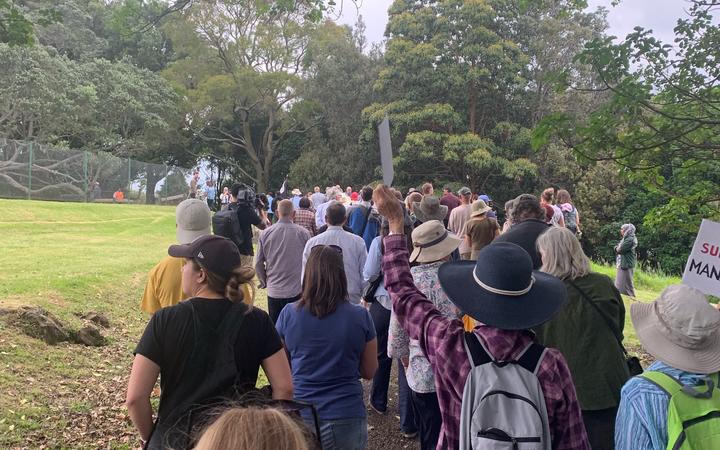 A hui was held for members of the public to air their concerns on the Ōwairaka restoration project. Photo: RNZ / Māni Dunlop

The hui, called by Tūpuna Maunga Authority, was for the public to air their concerns about the restoration project on the mountain.

A small group of protesters, Honour the Maunga, who are against the felling of 345 non-native trees, refused to attend – with only some members going individually.

Earlier this week, Tūpuna Maunga Authority chair Paul Marjurey described the situation at the maunga as a clash of worldviews.

While everyone gathered at the entrance of the maunga prior to the hui, on one side was the Honour the Maunga group and their supporters, on the other were mana whenua, Māori, members of the public who had come to see what was going on – the division was clear from the outset.

Leaving a group of protesters behind, kaumātua Koro Ngapo then led a karakia, which he said was used by his ancestors who walked that very whenua, to whakawātea – or clear the way – for the rōpū making their way up the maunga.

As the group arrived at the hui site, a member of the maunga authority addressed the crowd, reminding them of the Treaty Settlement that led to the authority’s conception.

He spoke of the mamae, the raupatu, the devastation and desecration of wāhi tapu in Tāmaki Makaurau – including the ancestral maunga – and that the authority’s role is to restore them, as best they can to their original state.

A kura kaupapa teacher, who brought some of her tauira with her, said she only brought a small group of tauira in fear of how the adults might behave.

She also asked the protesters to not question her students about how often they go to the maunga – the maunga which is acknowledged at their kura and kohanga every day.

Protester Lisa Prager has been one of the key figures in the protest since it started 19 days ago. She claimed she was mana whenua – despite being pākehā and not having any whakapapa connection to the whenua.

“I acknowledge the pain of colonialism, but the truth is we all have a place to share.”

She then described the felling of 345 non-native trees as utu – and proceeded to explain the concept to a pae of prominent kaumātua.

A woman who says she moved to Aotearoa from Samoa 50 years ago, says she feels like mana whenua and then performed a karanga to the crowd. She gave them a “message from beyond”, cursing mana whenua and their future generations for allowing this project to go forward.

What was described as a mākutu was met with much hostility, with Independent Māori Statutory Board representative Tau Henare saying he felt he was being colonised twice over. 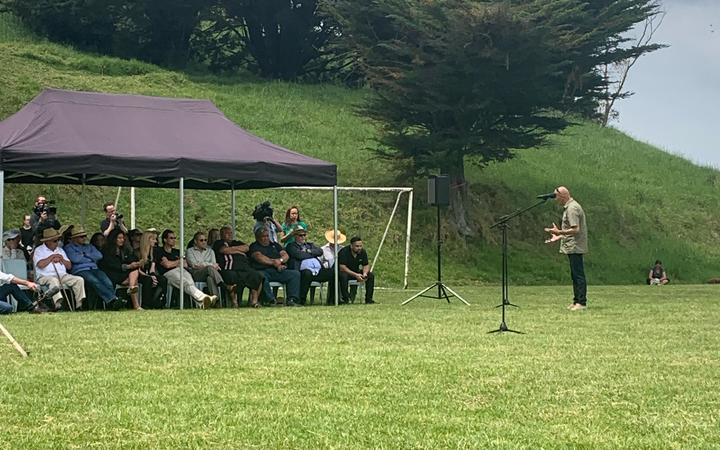 He called the protesters a group of woke and entitled pākehā – with only one lone police officer attending their protest – a stark contrast from Ihumātao.

Koro Ngapo said it was clear the message and purpose was lost on many in the protest group and what was said was offensive.

“I just don’t think they really understand what they were actually engaging in, I think there were a lot of people that were really, really offended by what they actually said, but it is what it is, it’s up to the TMA to do what they need to do, but certainly from a cultural view in terms of karakia and takutaku and so forth we did what we had to do to keep everybody safe.”

Honour the Maunga spokesperson Anna Radford said if any offense was caused by those from the protest group that attended did so in their individual capacity. 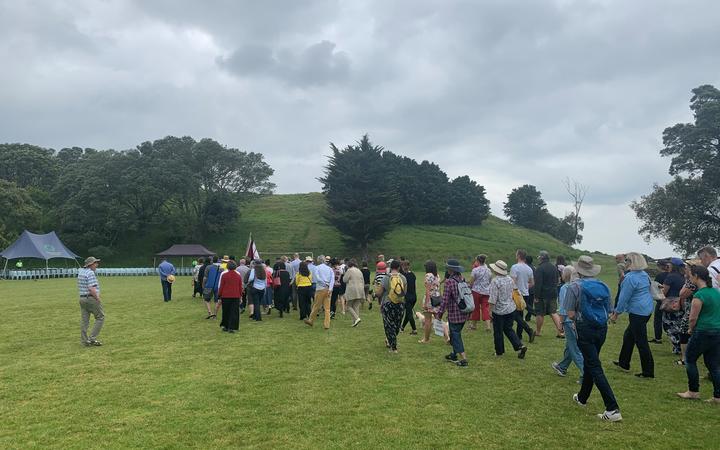 She said the decision was made to not attend because she did not believe the Maunga Authority wanted to meet them halfway.

“We have decided not to attend the hui, because we believe that there is no integrity in the process, and no willingness to engage in an open way with us – we have decided to just stand here and we are not blocking the hui in any way.”

Among other speakers on the day included Māori arborist and lecturer Zane Wedding. He expressed his gratitude to mana whenua and the Tūpuna Maunga Authority for wanting to restore the maunga to its original state.

He told the protest group to worry more about ancient trees their neighbours were cutting down – not mana whenua.

He said the maunga restoration project was more than just planting trees and that no devastation would be caused – instead it was tino rangatiratanga in practice.

“So to give them [protesters] precedence on this maunga, how much mana does that give back to my people? I am a Māori that didn’t grow up with tikanga Māori or within te ao Māori, this is bringing me back to my culture, it fills me with mana.”

Tūpuna Maunga Authority chair Paul Majurey said that some of things throughout the hui were ill-informed – but was a good opportunity to hear many views. 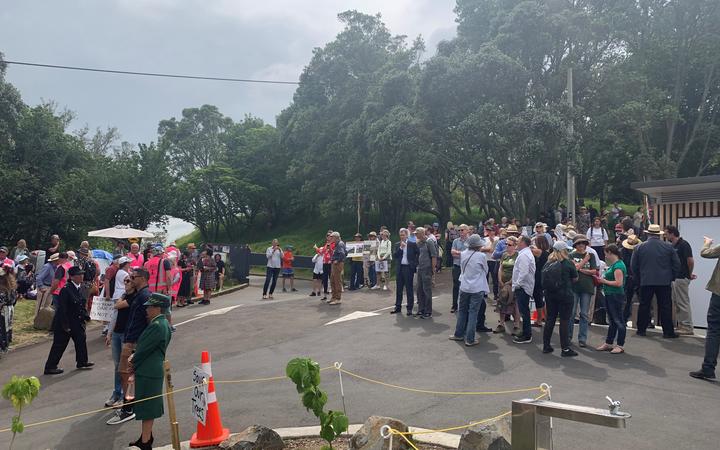 He said they still needed to engage with the protest group to see where they were at – and for that reason there was still no decision on when the tree felling would start.

“We have tried to accommodate what they sought from us in terms of a meeting it seems there were a few from their folk that were here but certainly the great majority were not.

“So we need to take stock, where are they sitting, how do they see it, are they looking to absolutely say that regardless of what’s spoken about and what we discuss they’re going to try and stop us – we don’t know we’ll have to see where we get to with that.”

Although Koro Ngapo deemed much of what was said by the other side as offensive, he believed that could be solved if they engaged genuinely in this country’s history.

“[They need] to educate themselves around co-governance and not to be threatened by it, because I understood what everyone was saying today, we all have a connection to all our maunga throughout Aotearoa, but I think one group has used this type of issue to put their views across, and I don’t necessarily think they are listening.”

The protesters have tied ribbons around the trees they don’t want cut down – which sit in among healthy tōtara, karamū and karaka trees that Tūī and kererū/kūkupa were flying in and out of during the nearly three-hour hui.

Honour the Maunga vow they will continue to occupy the land until they know the non-native trees on the maunga will not be cut down.

What are the factors that affect foreign direct investment(FDI)?

5 Great Services You Can Find With TOP Platform.

2 Good Reasons To Consider Getting Translation Help From TOP.