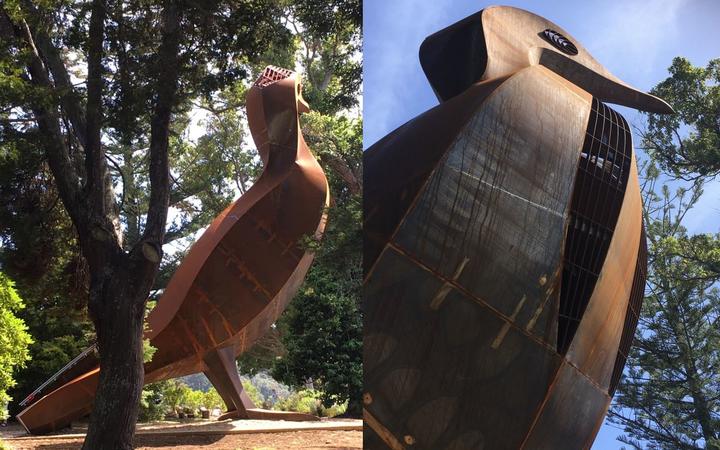 A giant interactive sculpture which stands 10 metres high and looks out to the water in Hobsonville Point is much loved by locals, but is leaving some people in tears.

Hobsonville Point locals are warning others about the Harrier Point Park slide on social media, with some saying family members have hurt their back from using it.

One person said the slide was “an accident waiting to happen”, another said a work colleague’s daughter had to be rushed to A&E because they thought she had broken her coccyx.

Te Kanohi O Te Manu – The Eye Of The Bird features a viewing platform within the head of a pied shag and a slide within the body, exiting at the tail.

It’s the tail-end that people are most concerned about, with some saying while its an amazing design overall, it has a “terrible design of the exit”.

A few people said they’ve seen both adults and children in tears after a rough landing.

The Hobsonville Point website describes the interactive play sculpture by artist Philipp Meier as offering an outlook equal to that of a three storey building.

Meier has designed a range of Auckland’s interactive playgrounds, including the kamo kamo, faintail and snail at Myer’s Park, the birds nests at Hobsonville Point Park and the mussel climbers at Wynyard Quarter.

The sculpture, which is Kāinga Ora owned and was partly funded for by Auckland Council, was inspired by the native pied shag which inhabits the Hobsonville Point coast.

In a statement, Auckland Council said it was unaware of any injuries relating to the slide.

“Although we have not received any reports, we are very concerned to hear of people injuring themselves while using the slide. Public health and safety is our number one priority and we ask that visitors to Te Kanohi o Te Manu, report the injury to council with as much information as possible.

“In the meantime, we will be working with Kāinga Ora to identify and resolve the issue.”

Hobsonville Point Residents Society spokesperson Christine Glover said she had seen the comments on social media about the slide and has raised the group’s concerns with Kāinga Ora.

She added that Hobsonville Point locals love the slide, they just want to be able to safely use it.

“Essentially what photography is, is life lit up.”— Sam Abell – Visit The Online Publishers TOP online photos for inspiring, professional photography. Want To Start Selling Your Photos Online? Here Are the Steps to Follow

“TOP platform” The Online Publishers is the best place to check first for freelancer jobs and ebooks to read.