Latest News
Home Business Covid-19: What happened in NZ and around the world on 17 May 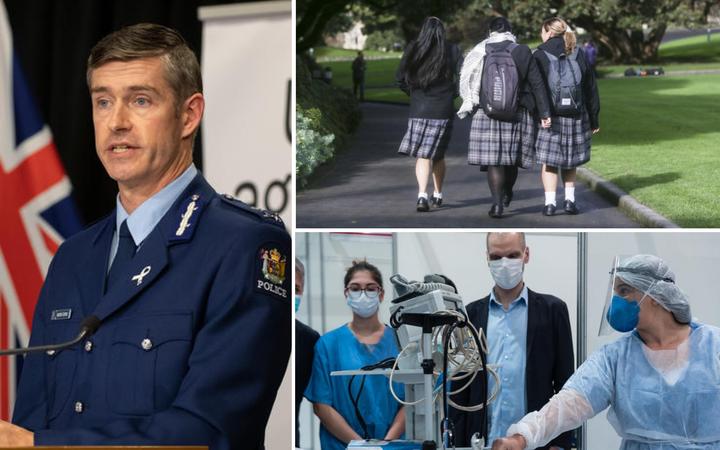 Covid-19: What happened in NZ and around the world on 17 May

There were no new cases of Covid-19 in New Zealand announced today after the first weekend of level 2 rules.

In today’s briefing, Dr Ashley Bloomfield also said there were also no further deaths to report.

The total number of confirmed and probable cases remains at 1499, of which 1149 are confirmed cases.

Two people are in hospital, one in Middlemore and one in Auckland hospital.

Dr Bloomfield said 2570 tests were done yesterday and 230,718 tests have been done in total.

There was only one new case of Covid-19 reported in New Zealand on Sunday.

Dr Bloomfield said he would be virtually attending the World Health Assembly being held tonight in Geneva, and he would lead New Zealand’s team present at the meeting. Health Minister David Clark would also be there.

“New Zealand is co-sponsoring a resolution on Covid-19, the purpose of the resolution is to agree, at a high level, the future areas of work to be undertaken on Covid-19 by member states and the World Health Organisation and other organisations,” Dr Bloomfield said.

He said an example of what will be discussed was fair access to vaccines.

“At a time of public health crisis, it’s critical that countries come together and the Covid-19 resolution aims to support that,” Dr Bloomfield said.

There would also be a review into how the pandemic was handled in the resolution.

Around 800,000 children and teenagers returned to school today, most for the first time since 24 March.

Schools have to maintain strict hygiene with hand sanitiser in classrooms and contact registers for all school visitors.

With physical distancing on public transport, there were concerns students would be left stranded at bus stops.

Auckland’s Macleans College principal Steve Hargreaves said he was sending out vans to pick up pupils if they were left behind.

Despite some mixed feelings about the return, schools reported about 80 percent of students were in attendance.

Level 2 rules meant people could gather in groups of 10, but certainly not throw big parties. Some students in Dunedin went ahead and did that anyway and police said they were required to break up multiple parties around the student areas.

That same night, the student quarter saw the familiar sight of a burning couch. Two people believed responsible were found hiding under a flax bush and were arrested.

The incidents came a day after the University of Otago praised students for their behaviour during the lockdown.

There were 30 breaches for house parties or gatherings on the weekend across New Zealand with 29 warnings given, and one prosecution.

At her weekly post-Cabinet media briefing, Ardern said an app best described as “digital diary” would be released on Wednesday.

“It’s what I describe as a digital diary … helping users when they are out and about keep a log of their own movements, for instance between cafes and restaurants.”

She said it would be for people’s own personal records and would not be shared any further.

Work on a separate app which could use bluetooth technology to record when people came into contact – like the one used in Australia – was still under way, she said.

The government has announced $278.2 million from the Budget will go towards restoring the 100 percent funding band for teacher-led ECE services.

Ardern and Education Minister Chris Hipkins spoke at 3pm during the weekly post-Cabinet media briefing. Ardern said the funding would encourage centres to keep their fully trained teachers in work at a time when they may be struggling.

“Quality early childhood education will be an important part in our response to Covid-19,” she said.

Hospitals in São Paulo ‘near collapse’

The mayor of Brazil’s largest city, São Paulo, says its health system could collapse as demand grows for emergency beds to deal with coronavirus cases.

Bruno Covas said the city’s public hospitals had reached 90 percent and could run out of space in about two weeks.

Brazil’s far-right president Jair Bolsonaro has been strongly criticised both at home and abroad for his handling of the country’s escalating Covid-19 crisis.

He defied global health advice for distancing rules on Sunday when he posed for photographs with supporters and children in the capital, Brasília.

Japan has fallen into recession as the financial toll of the coronavirus continues to escalate.

The world’s third biggest economy shrank 3.4 percent in the first three months of 2020 compared to a year ago, its biggest slump since 2015.

The 3.4 percent fall in growth domestic product (GDP) for the first three months of 2020, follows a 6.4 percent decline during the last quarter of 2019, pushing Japan into a technical recession.

When you need someone who can act as an international campaigner for you, or you need help with online lobbying, to find the best digital marketing agency that can handle SEO for you and a variety of other needs for your business or website, TOP has the solutions.