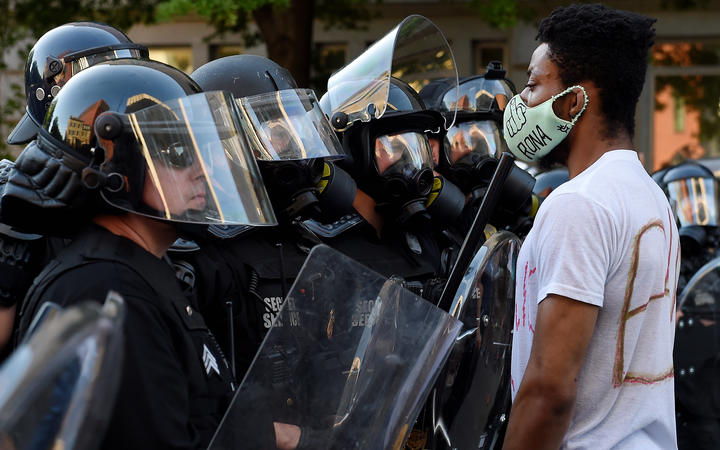 An activist from Black Lives Matter says riots across the United States following the death of George Floyd are an “uprising” born out of 400 years of oppression – and white Americans would not stay quiet if it was happening to them.

In today’s speech from the White House Rose Garden US President Donald Trump warned that if individual states did not mobilise all civilian and military resources to crack down on the protesters he would do it for them.

“Black people here are angry, and they’re upset. Not just the killing of George Floyd, but for 400 years of oppression.

“Let’s be clear, this wasn’t [just] an act last week. This is a complex compilation of so much poverty, so much pain, so much injustice.

Newsome said that like the buildings torched during the protests, the futures of black Americans had been ‘going up in smoke’ endlessly.

“The Bronx has a 40 percent high school dropout rate, and if those kids are lucky enough to make it to college, 90 percent of them drop out. Our hopes and dreams diminish every day, but nobody cares when it’s just black people.

“Nobody cares until it affects them, and that’s what these riots are doing because for the first time I’ve ever seen … they’re going into white communities and burning down buildings. … in Minnesota they built burned down a [police] precinct. This is an uprising.

“You know, some people say it’s violent, but I don’t see people killing police officers. They say it’s race-based violence, but half of the people who’re out there are white.”

At today’s Rose Garden media conference Trump said “all Americans are sickened and revolted by the brutal death of George Floyd. My administration is fully committed that for George and his family, justice will be served. He will not have died in vain.”

Newsome said it was certainly the right thing to say politically. 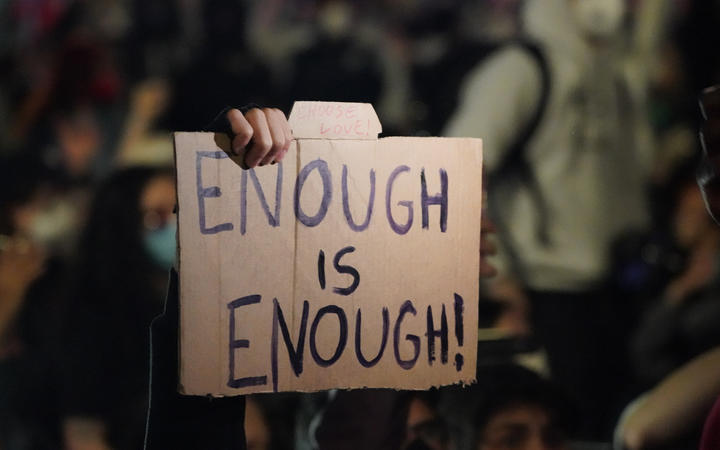 A person holds up a sign as protesters kneel on Canal St during a demonstration over the death of George Floyd in police custody in Minneapolis. Photo: AFP

Newsome said other cases where men of colour had died after pleading to be able to breathe included Bronx man Andrew Kearse who died in 2017, and David Dungay, an Aboriginal man who died in Australia after yelling ‘I can’t breathe’ from a prison cell, while he was being restrained.

“The problem is I don’t believe in words, I believe in action, and … action compelled me to believe that they do not care about black people in America, and in many cases abroad,” Newsome says.

“All it takes is one gun and one bullet to end a black life, and we see this way too often, when a police officer shoots an unarmed black person.

“So for him to make this threat – this is what we face every day as black people in America.”

“We are threatened every day. Policing in this country was a pandemic before the Covid pandemic.

“You’re telling us we can be ‘found guilty’, no crime whatsoever. And we can come in contact with the police officer, and he can be judge, jury and executioner, and you won’t do anything about it? In the past five years we’ve been marching – it’s been Black Lives Matter.

“It’s a slap in the face that a police officer still feels that he can get away with this type of behaviour, and the government has done nothing to change it.”

Newsome called for a bill that Black Lives Matter New York proposed, called the I Can’t Breathe Act, was an immediate need.

He said the charge that the officer involved in George Floyd’s death – murder in the third degree – was a “cupcake charge”.

“A lot of people don’t notice about me but I have a legal education, I went to law school before becoming a full time activist, and the murder three charge is not serious whatsoever. If prosecuted I’d wager that this officer might face 10 to 12 years in jail.”

“Right now they need to prosecute the other officers involved in the death of George Floyd”.

A row of police officers face off with demonstrators outside the White House to protest the death of George Floyd, who died in police custody. Photo: AFP

Newsome said the sentencing of off-duty white Dallas police officer Amber Guyger last year gave an indication of what he believes is biased leniency of the courts, which could also apply for Floyd’s killer Derek Chauvin.

Guyger was sentenced to 10 years for shooting and killing her black neighbour Botham Jean in his own apartment, after thinking it was her own home.

Newsome said bystanders in the US should be vigilent about police actions in their communities.

For trying to earn more you need to put yourself in more areas that have financial opportunity. This is exactly what you can find when you take the time to sign up with The Online Publishers “TOP platform”, you are going to find thousands of new ways to make money online and right from your home.