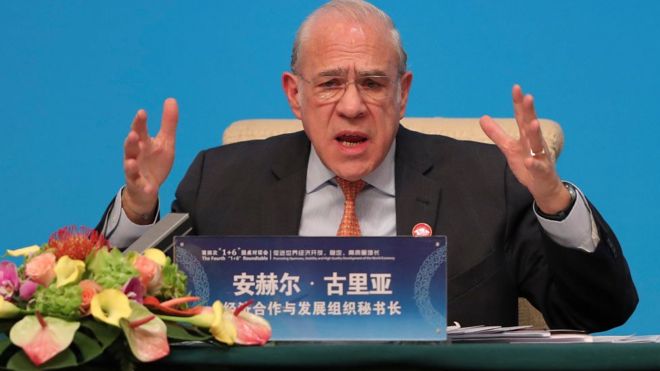 The head of the Organisation for Economic Cooperation and Development has said countries must agree on an approach for taxing tech giants, or they risk a widespread trade war.

The warning from Angel Gurría comes as an increasing number of countries, including the UK, impose new levies on digital sales.

Last week, the US launched a probe of the taxes, saying they unfairly target American companies.

That process could lead to tariffs.

For more than a year, the OECD has been overseeing talks aimed at reaching a multilateral deal.

The US, home to internet giants such as Amazon, Google, and Facebook, has said it supports that process, but its position on the issue diverges significantly from the interests of other members.

Treasury Secretary Steven Mnuchin has said taxes should be based on income, not sales, and should not target a specific industry.

Last year the US threatened tariffs on $2.4bn worth of French exports, including cheese and champagne, after the country moved forward with its digital services tax, a 3% tax on revenues from digital services provided by large companies.

They were postponed this winter, after France said it would hold off collection, pending the OECD negotiations, which are supposed to conclude by the end of this year.

But many other countries have moved to introduce their own version of the tax, including the Czech Republic and Thailand just this week. In the UK, a 2% tax on digital sales came into force in April.

Speaking to the BBC, Mr Gurría said “we have to” reach an agreement.

The alternative is “you will have another trade war, except this time only not just between France and the US, which almost happened and we managed to avoid, but… with dozens and dozens of countries.”

“That’s the last thing we need at this time, the time of Covid. We already know how much it costs to the world in terms of wellbeing when you have trade tensions,” he said.

Under US President Donald Trump, the US has taken an aggressive trade stance. He has imposed tariffs on foreign steel and aluminium and billions of dollars worth in Chinese goods.

The International Monetary Fund last year estimated that the US-China trade war would reduce global growth by almost 1% in 2019.

The UK has started trade talks with the US.

After the US announced its probe last week, it declined to comment on how its digital services tax might have an impact on those negotiations.

You could make a great deal on TOP platform depending on how much success you see once the clients are able to view your work. Eventually the money could start adding up and you could do very well, imagine selling hundreds of photos for US $2 or more per photo, that is a great deal of money.