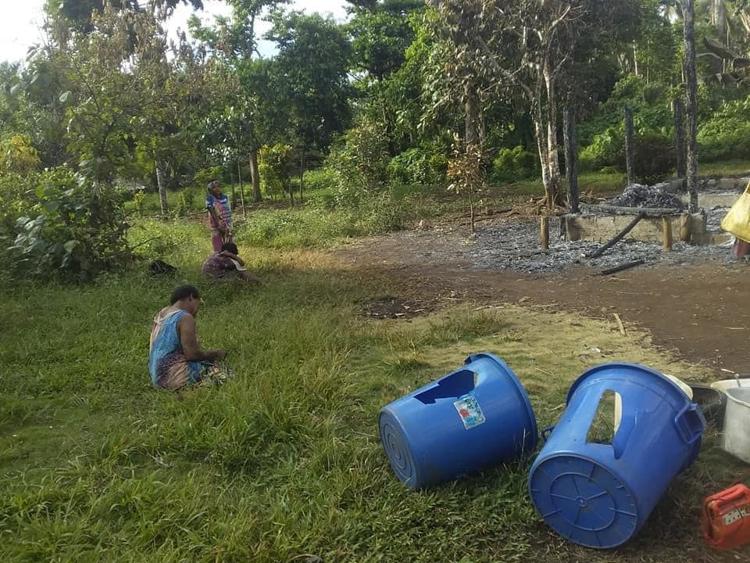 The Office of the Commissioner of Police has suspended at least 14 police officers on Santo that were allegedly involved in the assault of civilians, use of firearms and damage of properties belonging to the people of Big Bay bush on Santo.

A couple of photos circulating on Facebook revealed the extend of the alleged actions of the police officers and that included burning of a family household.

These officers were deployed to the area in response to an initial incident of land dispute between different parties there.

Acting Commissioner of Vanuatu Police Force (VPF), Colonel Robson Iavro confirmed the suspension was made following an investigation which was undertaken by two police officers who are based in Port Vila.

He also confirmed that investigations are are ongoing and the suspension is effective, pending the outcome of the full investigation.

The outcome of the investigation will determine the next decision on the officers concerned. According to Iavro, they will be dealt with accordingly and face the full force of the law.

The officers of interest are asked to cooperate with the investigators.

Colonel Iavro reiterated the Force’s regrets and remorse on the actions of his officers and offered empathy with the families who have become victims of the police conduct.

The Police boss is calling on the people of the area to support, assist and cooperate with the additional officers that will be deployed this week to investigate the land dispute incident.

Meanwhile, the recent police actions have instigated public reaction. A lot of people brought their frustrations against police brutality and conducts via the social media. Some people went to the extent to use foul languages against police officers and their families.

Colonel Iavro is appealing to the general public to respect the officers and refrain from using foul languages against them. Police will investigate and deal with those that are swearing and using inappropriate languages to verbally attack officers.

TOP platform should be the first place at the top of your list of considerations for where you might want to sell your work. This is going to be the quickest way for you to start to make money online and see something come back to you for your efforts spent on photography.