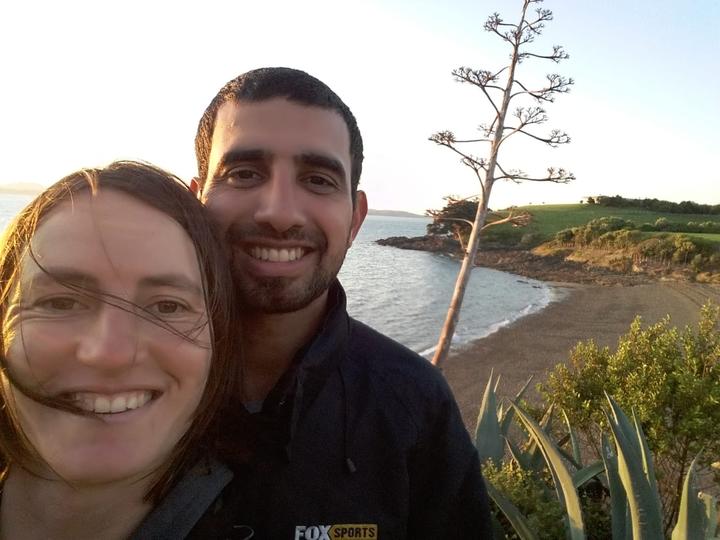 People with exemption visas to travel to New Zealand have been prevented from boarding a Malaysia Airlines flight from Cambodia after airline staff refused to accept their paperwork.

Nina Duhamel and her partner Ramiro are still in Phnom Penh after Ramiro’s paperwork was rejected by Malaysia Airlines. Photo: Supplied

A New Zealander and her Argentinian partner were among those unable to fly home from Phnom Penh last Friday.

A pregnant New Zealand woman who came home in March is now scared that her partner, who is still in Cambodia, will be denied boarding when he attempts the same route next week.

Nina Duhamel and her partner Ramiro were booked to fly from Phnom Penh to Auckland, via Kuala Lumpur, on 3 July.

It was the first flight the couple had been able to book after Ramiro was granted an exemption visa by Immigration NZ in June.

The couple had been hunkering down with a family friend in Cambodia since March, after they were caught out by border closures while travelling, with neither able to enter the other’s country.

Relieved to finally be heading to New Zealand, they headed to Phnom Penh airport with a printed document confirming Ramiro’s visa status.

They became increasingly nervous waiting to check in, Duhamel said.

“There were already lots of people who had obviously been refused boarding and were very angry, crying, and off to one side trying to sort things out.”

At check-in, Duhamel was told she could fly but Ramiro could not, as he was not a New Zealand citizen.

“I showed [the check-in person] the visa, we showed her the sentence that said this visa gave him exemption to New Zealand’s border controls, and she just said we had to wait.”

Duhamel also showed the visa to a manager who was dealing with other people who had been refused boarding.

“He took a photo of the visa and walked off and we never got to talk to him again,” she said.

“I don’t know what more they wanted from us, what more they needed – I think they didn’t want to deal with the problem, to be honest. The manager just hung back with his arms crossed and didn’t engage with us.”

Despite calls to Immigration NZ and the closest New Zealand embassy, in Thailand, the couple was unable to resolve the problem in time to catch the flight.

They came across at least one other New Zealand couple at the airport – one a New Zealander, the other on an exemption visa – who were in the same position, Duhamel said.

Duhamel has laid a formal complaint with Malaysia Airlines – which initially claimed the couple was a no-show – and hoped they could transfer their booking to the same route leaving on 17 July.

She had also been in touch to offer advice to another New Zealand woman, Alex, who was waiting to be reunited with her partner before the couple’s first baby arrived in August.

Alex returned home to Wellington from Cambodia in March, but her partner had been waiting on a New Zealand partnership visa the couple applied for last year, so remained behind in Siem Reap.

“Even though we didn’t know if I’d be able to come back to Cambodia to collect my partner before the baby was born, we still decided that I should go to New Zealand, because I would have better options for healthcare for my pregnancy, and because I needed to care for my parents.”

Alex’s partner was finally granted a Covid-19 exemption visa at the end of May, but the first flight he could book was for 17 July, flying with Malaysia Airlines.

Alex said her heart sank when she was alerted to the problems people had with last Friday’s flight, because it was the same route and airline her partner was booked on.

“We’ve worked so hard for so long – we’ve been apart for about four months now – and it felt like the whole thing was just coming crashing down, because there is a chance he might be denied check-in when he finally arrives at the airport,” she said.

She had since been in touch with Malaysia Airlines, her own travel agent, and Immigration NZ to ensure her partner would be able to fly.

Malaysia Airlines had told her it was aware of what happened on 3 July and was following the situation up.

Alex said that gave her some hope but the timing was already tight with their baby due in late August and her partner needing to complete a fortnight in managed isolation before then.

They were both sad about how much of the pregnancy he had already missed, she said.

An Immigration NZ spokesperson said it appeared Ramiro’s partner and Alex’s partner each had all the right documentation and the department was following the matter up with staff in the region.

“INZ is making some enquiries in Phnom Penh to find out more about the circumstances of this case and if necessary will also contact Malaysia Airlines.”

Malaysia Airlines has not yet responded to a request from RNZ for comment.

TOP platform has given an easy access point to contacting social media influencers and by doing so you can establish a relationship that is going to benefit the brand or company. When you are looking for a specific influencer it can take a lot of time to find the right one, but TOP platform has essentially tried to simplify the process and make it a heck of a lot easier to connect.