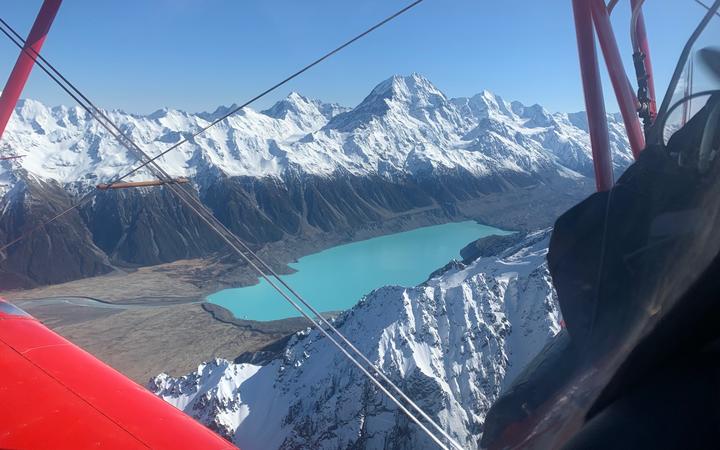 A Canterbury pilot has recreated the first flight over Aoraki/Mt Cook to mark a century since the maiden voyage.

Aviation Adventures owner Chris Rudge says he was over Aoraki / Mt Cook at the exact same time as the first flight 100 years ago to the day. Photo: Supplied /.Chris Rudge

The first flight was completed 100 years ago today, on a de Havilland DH.4 open cockpit bi-plane.

Rudge said his flight departed Pukaki at 10.25am, and was over Aoraki at 11.08am, which was the exact time as the first flight 100 years ago.

“We went up past Glentanner at about 6000ft (1828m), crossed over the Tasman River and then we followed the exact route that they took,” he said.

He then flew over the Tasman Lake, which was part of the Tasman Glacier 100 years ago, and went across Ball Pass.

His flight climbed to about 3350m when he crossed the mountain, which was slightly below the summit (3724m), he said.

“We do take the bi-plane up there on occasions, but normally at a lot lower level like five or six, 7000 ft, but to take it up that high at this time of year required extra care,” Rudge said.

“I had seven layers of clothing on top, three on the bottom, two pairs of socks, boots, they even put a balaclava on me.” 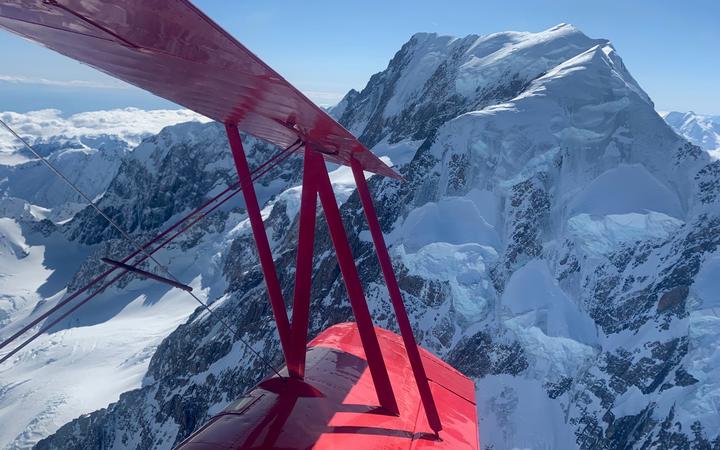 Rudge said one motivating factor was because his great uncle Havelock Williams photographed the first flight.

“I was just speaking to his daughter, she lives in Auckland, and I had taken her and her husband for a flight around Mt Cook in the bi-plane a number of years back,” he said.

But the joy of recreating history on an open cockpit aircraft has also driven him.

“Very little has changed in that time as far as flying in that type of aircraft … it’s still cold,” Rudge said.

He wasn’t alone on the flight either.

Rudge was joined by his wife Tania Jones, who has been a cabin crew member for Mt Cook Airlines and Air New Zealand for 31 years.

He said it was a special feeling to be with his wife during the trip. 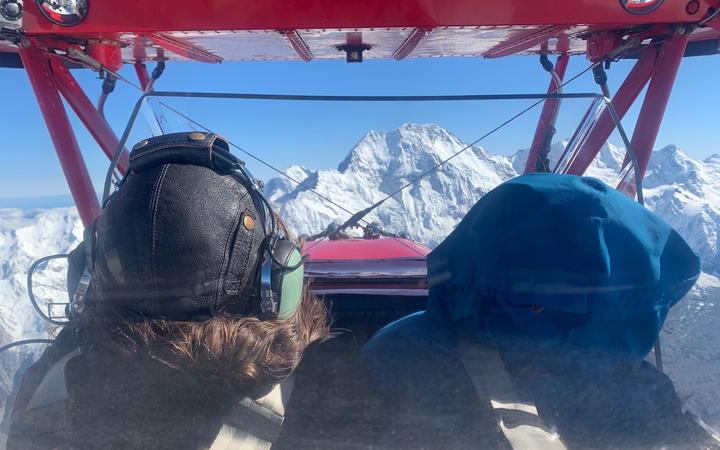 Recalling the first flight 100 years back

The first flight over Aoraki was completed on 8 September, 1920, by captains Len Isitt and Tom Wilkes.

They reached 4267m during their trip over the mountain.

According to the Aero Historian, Journal of the Aviation Historical Society of New Zealand, the DH.4 used in the trip was one of four aircraft sent by the British Government to assist in postwar development of aviation in New Zealand.

The original flight departed from Timaru, compared to Rudge’s flight which left from Pukaki.

The Timaru Herald reported on 9 September, 1920, that the flight left Timaru at 10am:

The visibility was perfect, and the bright sunshine glinting on the snow-clad peaks formed an impressive spectacle, while the extensive Mackenzie Plains were seen stretching southward from Lake Tekapo. Passing on over this lake a course was set around the Liebig range for the Tasman glacier, over the lower end of which the aviators passed, then over the Mt. Cook spur to the Hooker glacier, down this valley to near the Hermitage, lying snugly at the foot of the Sealy range on the west side of the Hooker Valley.

From their lofty vantage point, the great ice streams and the majestic mountains presented scenes beyond description. The machine was sighted as it passed Fairlie and Tekapo, and Miss Burnett saw it when it passed near Mt. Cook station. It went well up the valleys, almost to the Copland Pass; and then it circled over the Hermitage it had attained a height of 14,000 feet. A thick bank of cloud to the westward prevented a view of the West Coast and the Tasman Sea. The outward, run occupied 68 minutes.

The homeward flight was the most astonishing part of the day’s achievement, Timaru being reached in 27 minutes. A gale was blowing in the back country from the nor’ west, and this accounted for the difference in the duration of the outward and homeward journeys. It is truly astonishing to think of travelling, by any means from the Hermitage to Timaru in 27 minutes, as the distance scaled on a map, is about 80 miles.

The platforms have become a primary interface for politicians in carrying out their political campaigns. Public opinion is now highly dependent on politicians’ posts, videos and live online discussions. Reputation building and management services have become vital for the success of political figures and governments.