Latest News
Home News US election 2020: What to look out for on election night 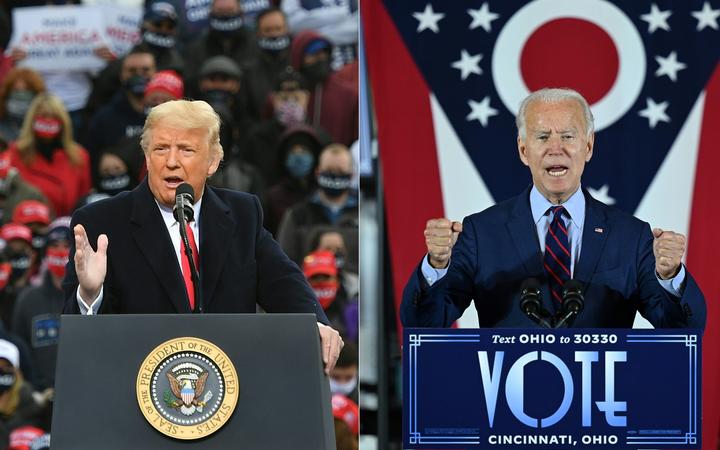 US election 2020: What to look out for on election night

Americans have been casting early votes in record numbers as the country chooses whether send Joe Biden or Donald Trump to the White House.

After the candidates end their campaign sprints across the country and polling day voters cast their ballots, here’s what to look out for as results of the 3 November election unfold on Wednesday (NZT).

To become US president, you don’t actually need to win the popular vote. Instead, candidates are aiming to win the majority in something called the electoral college (more on that below).

Millions more Americans are voting by mail than in previous elections. Counting postal votes can take more time, and some states won’t start until polling day, so there will almost certainly be delays for some results.

And because of this unprecedented surge of postal votes, a candidate who takes an early lead may end up being overtaken as postal or in-person votes are tallied. So be wary of the numbers.

Bellwether state: Places like Ohio and Missouri where voters have proven reliable at choosing the national winner

Exit poll: In-person interviews with voters as they leave their polling locations. Only a small number of voters are interviewed, so the exit poll result can turn out to be different to the official count.

Electoral college: Each state gets a number of electors, roughly in proportion to its population. In most cases, whichever candidate wins a state also wins all that state’s electors, who meet later to choose the president and vice president. Because there are 538 electoral college votes, each candidate needs 270 to win. There’s a full explanation of the system here.

Projections v calling: On election night, ballot counts will be used to predict – or project – the likely winner of each state and the nationwide vote. A state will not be “called”, however, until enough data has been collected to declare a clear winner. That includes months of polling, exit polls on the day and some of the actual votes counted (more below on that).

Swing state or battleground state: These states lack a clear party affiliation, meaning they are up for grabs for both Democratic and Republican candidates.

Red state v blue state: These states tend to vote with a particular party – Republicans in red states and Democrats in blue. 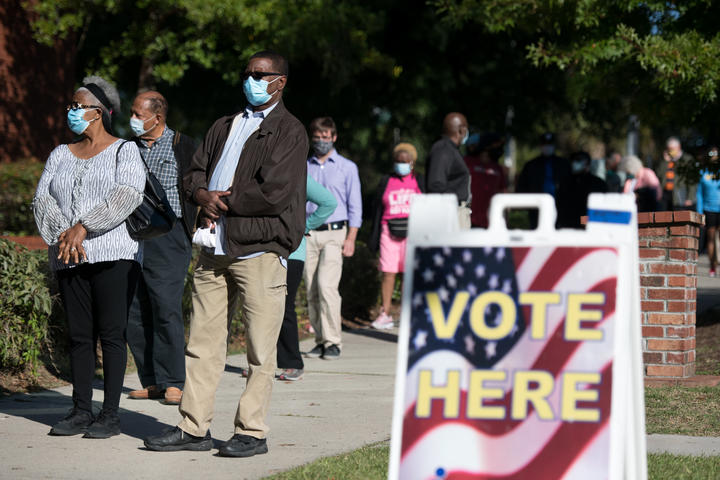 How to know who’s winning

The influx of postal ballots this year will make it hard to see who’s in the lead early on.

Different states have different rules for how – and when – to count postal ballots, meaning there will be large gaps between them in terms of reporting results. Some states, like Florida and Arizona, begin pre-processing ballots weeks before 3 November. Others, like Wisconsin and Pennsylvania, won’t touch these votes until election day, meaning they’ll likely be slower to count.

To add to the confusion, states differ in their deadlines for when to accept postal ballots. Some, like Georgia, will only count ballots received on or before 3 November, while others, like Ohio, will count late ballots as long as they are postmarked by 3 November.

We know for certain that in some states it will take weeks to get complete results, meaning it will be nearly impossible to predict when we can officially name the next president.

This hasn’t been the case in past elections, when you could typically set your watch to the 23:00 EST (5pm Wednesday NZT) closure of West Coast polls. In 2008, results came right on the hour and in 2012 they were just 15 minutes after that.

The last time around, however, it wasn’t until Donald Trump clinched Pennsylvania deep into election night – 01:35 EST (7.35pm NZT) – that his victory over Hillary Clinton was considered inevitable.

Don’t fall into these traps

There will be a few extra things to keep an eye on this year.

For one, early tallies may be deceptive. This is due in part to more differences between states in reporting.

In some states, ballots cast in person on election day will be tallied first. These are expected to favour Trump, as early polls show his supporters plan to cast ballots on 3 November.

But in others, postal votes cast prior to 3 November will be reported first or included in early counts along with day-of votes. Initial results from these states may favour Biden, as Democrats are more likely than Republicans to vote by mail this year.

There’s also the looming concern of electoral fraud – a common refrain from the Trump campaign. Importantly, instances of electoral fraud are incredibly rare, and there is no evidence that postal ballots are especially susceptible. Overall, the rate of voting fraud in the US is between 0.00004% and 0.0009%, according to a 2017 study by the Brennan Center for Justice.

How states are called

After the polls close, major US media outlets will be using election models to estimate who will win all the different races. The models draw on a variety of data such as exit polls (interviews with voters at polling stations) and actual votes counted by local officials and then fed into a database.

A state will be “called” by these media outlets when they believe a candidate has an unassailable lead. Same goes for state and local races. This is still a projection and not the final result.

The same is true when the presidential election is called for a candidate. It will take weeks for states to count all the ballots and that has always been the case but even more likely this time due to postal voting.

Last time around, in 2016, Hillary Clinton’s lead in the popular vote widened for more than a month after election day as officials counted ballots, many from California, even though Trump had already won enough states to claim the presidency. 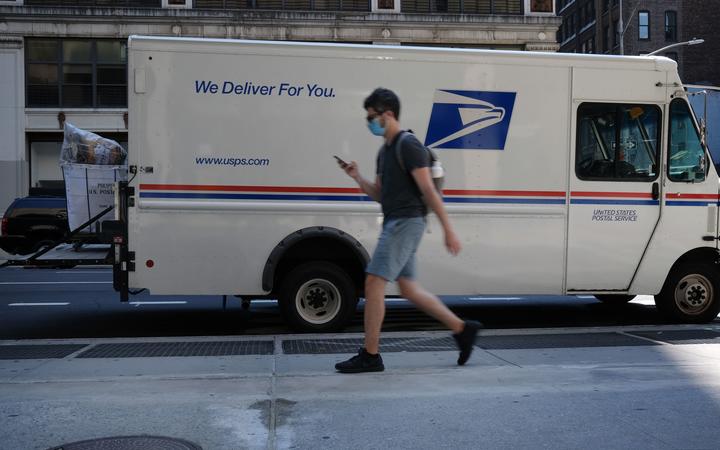 Why do postal votes cause delays?

Tens of millions of postal ballots will be cast in this year’s election – perhaps double the number in 2016.

There were concerns that the sheer volume of mail-in ballots would overwhelm the country’s postal service, delaying delivery and receipt by state officials. But the postal service has assured that’s not the case.

Some states will accept ballots that arrive well after election day – as long as they are postmarked on or before 3 November – which will further slow down the count.

And once they have arrived, postal votes take longer to count than in-person ballots. Postal ballots must be manually removed from their envelopes and verified as valid before they can be tabulated.

What happens if there is no clear winner?

If there are no clear results on 3 November we’ll have to wait days – or weeks – for vote counting to finish up.

It’s normal that all the votes aren’t tallied up on the night but this year it may take even longer.

Plus, there could be legal disputes which will add to the uncertainty and could mean the courts play a part.

We know that final results will be slow, but there are still some states that may give us early clues.

Polls will close in North Carolina at 19:30 EST (1.30pm NZT), where a large number of early in-person voters means projections could come quickly. Donald Trump narrowly won this state in 2016 and it is a toss-up between parties once again. A win here for Trump or Biden could mean a good night ahead.

Soon after, at 20:00 EST (2pm NZT) the last polls will close in Florida. Elections have been won and lost in this battleground state, and the same may be true this year. A note of caution: early in-person and postal ballots will be reported first in Florida and these will likely favour Biden.

And at 21:00 EST (3pm NZT), polls will shutter in Arizona, where officials began counting ballots on 20 October. Trump was victorious here in 2016, but national polls now give Biden a razor’s-edge lead. In Arizona, like Florida, early counts may favour Biden, whose supporters are more inclined to vote early or by mail.

In a number of other states, officials will not count a single ballot until 3 November. This means we’ll have to wait for a number of swing states, whose results are crucial for a clear picture of the country.

In Ohio, polls will close at 19:30 EST (1.30pm NZT). Officials will provide preliminary results on election day but then no further counts will be released until the final totals are certified, which must be done by 28 November. Ohio is not just a swing state, it is also a presidential fortune-teller: it has backed the winner at every presidential contest bar one since World War II.

Polls in Pennsylvania will shutter at 20:00 EST (2pm NZT) on election day. Both candidates’ likely path to the White House will run through this battleground state, the place where Biden was born and which Trump won in 2016 by a single percentage point.

In both Wisconsin and Michigan, polls will close at 21:00 EST (3pm NZT). Democrats have been hard at work in Wisconsin after Hillary Clinton’s narrow loss there in 2016 . Some polls now give Biden the lead, but the state is still up for grabs. Neighbouring Michigan – another swing state – will also be closely watched, and is seen as critical to victory for both Biden and Trump.

Biden and Trump aren’t the only two people on the ballot.

Both parties will be paying close attention to elections for the US Senate – where Republicans currently hold a three-seat advantage.

Trump ally Lindsay Graham is in the fight of his political life in South Carolina, facing a stiff challenge from Democrat Jaime Harrison. Graham has held this seat since 2003, but he has turned away some voters with his staunch loyalty to the president.

In Maine, Republican Susan Collins may soon be out of a job. Ms Collins is one of the few moderate members of her party in office right now, but she still may be punished for her affiliation to the president in a state where he is deeply unpopular.

And that’s not all. Americans will also weigh in on more than 100 ballot measures. In California, a referendum is looking to overturn a law which eliminates cash bail entirely, and replaces it with a pre-trial risk assessment.

Marijuana is on the ballot in Arizona, Montana, New Jersey and South Dakota, where voters could legalise cannabis for recreation purposes. Similarly, in Mississippi, voters may cast their ballots to approve marijuana for medical purposes.

Market yourself and your journalism skills in an entirely new way, with this quality international platform that can connect you with the best freelance opportunities out there today. Find freelance writing jobs for press release services through TOP, that will pay you for your efforts, and so much more. Sign up today and start to explore great opportunities to make money online as a journalist.