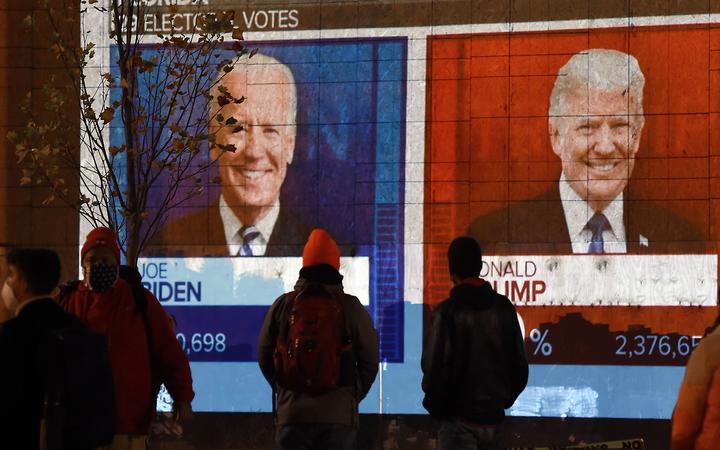 US Election: What Trump and Biden still need to clinch victory

The outcome of the US presidential election is still unknown with President Donald Trump claiming victory despite incomplete results and his rival Joe Biden saying he is “on track” to win the White House.

Election night is now on the verge of turning into election week.

Results so far suggest a tight race in key states, with the candidates needing 270 electoral college votes to secure the presidency. 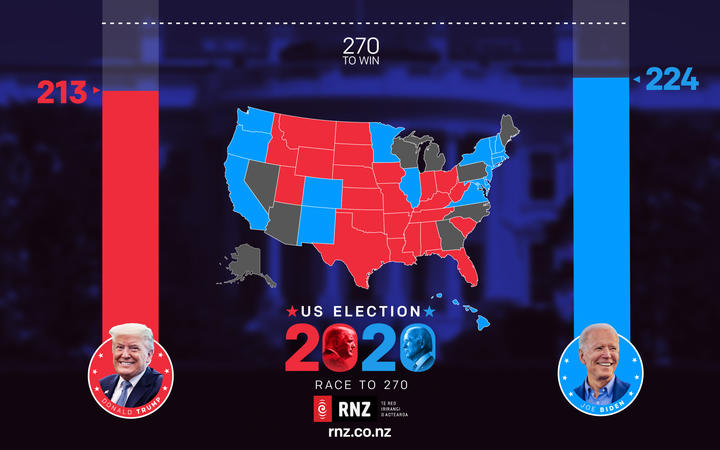 Here’s what the candidates need to happen in order to win the White House.

Polls before Election Day had suggested possible outcomes ranging from a comfortable win for Biden to a narrow Trump victory where he loses the national popular vote but once again carries enough battleground states to win in the electoral college.

After a vote count that has stretched from the evening into early morning hours, a Biden landslide is off the table. The victory will be narrow. It’s just a matter of who and how – and how long until we know.

Trump has already declared victory and accused his opponents of committing electoral fraud. This is, however, simply not the case at this point. There are still millions of legally cast ballots in the process of being counted.

A national race is boiling down to just handful of states: Arizona, Georgia, Wisconsin, Michigan and Pennsylvania.

Who will win the battleground states?

Arizona appears to be trending toward Biden, which means the Democrat would have to win two of the three so-called 2016 “blue wall” states – Wisconsin, Michigan and Pennsylvania – to secure victory.

Late tonight with 95 percent of the vote counted Biden was ahead in Wisconsin but trails in the other two. The remaining votes to be counted in all three states are expected to favour the Democrat – perhaps by enough to pull him ahead.

There are more than 1.4 million vote-by-mail ballots left to count in Pennsylvania, and it could take days to tabulate them all. The big cities in Michigan (Detroit) and Wisconsin (Milwaukee) are also yet to fully report, and they will heavily tilt toward the Democrats. 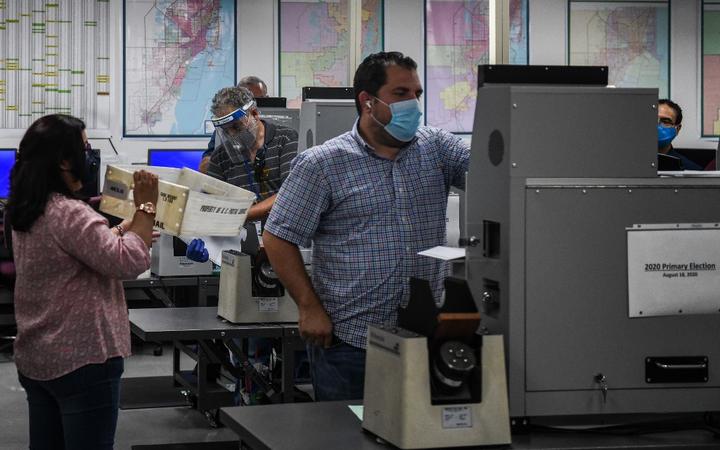 There are over one million votes still to count in the critical state of Pennsylvania. (file pic) Photo: AFP

In Wisconsin and Pennsylvania and much of Michigan, mail-in ballots did not start to be processed until Election Day.

Meanwhile, Georgia is a wildcard. What seemed to be heading toward a comfortable Trump win earlier today has ended up in a dead heat. Results from Biden-friendly Atlanta were, improbably enough, delayed by a broken water pipe in a vote-counting location. A Democratic win in Georgia would mean Biden only has to carry one of those Midwest states.

What else is delaying the count?

About half of states will accept postal ballots that arrive after Election Day, as long as they are postmarked by 3 November, so some votes won’t be counted until days after the election.

There’s also expected to be a rise in provisional ballots – votes cast by people who requested a postal ballot but decided to vote in person instead.

And these won’t be included in the initial count, as they require checks to ensure people don’t vote twice.

What was once a nightmare scenario is taking shape, with Biden claiming he is on a path to victory and Trump lobbing unfounded accusations of voter fraud and electoral theft.

It’s a recipe for acrimony and a protracted court battle, which ends with supporters on the losing side feeling angry and cheated.

Although the final results aren’t known, what is clear on election night is that the US continues to be a sharply divided nation. The American voters did not repudiate Trump in any meaningful way. Nor did they give him the kind of ringing endorsement that the president had hoped for.

Instead, the battle lines are drawn – and the political warfare will continue no matter who prevails in this particular election.

More than 100 million people cast their ballots in early voting before Election Day – setting the US on course for its highest turnout in a century.

The pandemic has already led to more than 300 election law cases in 44 states, according the Stanford-MIT healthy-elections project.

And the presidential vote could see legal challenges over everything from identification requirements for postal voting to Covid-related changes to polling systems.

In 2000, Democrat Al Gore lost Florida and the presidential election by 537 out of a total of almost six million votes.

And this was followed by a highly controversial recount process that lasted over a month – and the Supreme Court ruling in favour of Republican George W Bush.

A business owner applies Search Engine Optimization “SEO” for his website in order to enhance its ranking in search engines, thus boosting traffic to that website, enabling it to reach a good number of target audience and clients. Once a web surfer runs a search using Google or other search engines, the most relevant webpages, websites and content appear at the top of the search results page.