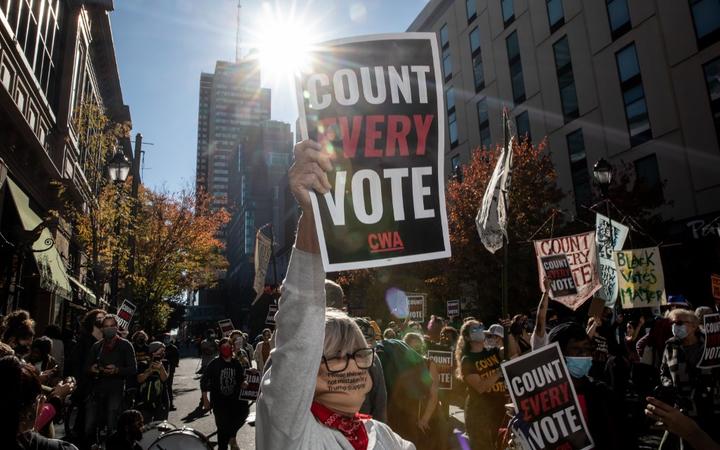 US President Donald Trump on Friday made a rambling 16-minute address riddled with false claims, delivered in the White House press briefing room.

“If you count the legal votes I easily win,” he falsely claimed, also saying that political pollsters were “knowingly wrong” before the election.

Addressing media, Trump claimed there had been a lot of “shenanigans” and the US would not stand for it. He walked away without answering any questions.

“If you count the illegal votes, they try to steal the election from us,” he said, falsely claiming that the mail-in votes being counted after the US’ election day were illegal.

It was his first public appearance since declaring on election night that he had won the presidency.

Wisconsin, Michigan, Pennsylvania, Arizona and Nevada are all potentially lining up as the legal battlegrounds.

The Trump camp has already launched several legal bids to challenge or stop the vote count in critical swing states, as Joe Biden increasingly appears to have an easier path to 270 Electoral College votes, and the Oval Office.

Is there actually any evidence of voter fraud? Or a case for the courts to wade into?

Professor Kermit Roosevelt from Pennsylvania University is an expert in US constitutional law. He is also the great-great-grandson of US President Theodore Roosevelt.

“The leader of our political system is really attacking the system itself. And it’s what we’ve come to expect from Donald Trump. He doesn’t really play by the rules, he doesn’t seem to respect the idea of American self-governance.

“But it’s disturbing to see how willing he is to call into question the legitimacy of the system, or really set aside the system, if there’s any element of it that’s not working to his favour.

“So far he’s made some very broad and vague claims about fraud, and there’s really no evidence for that. He hasn’t specified what he’s talking about,” Professor Roosevelt said.

“There are particular issues with ballots received after Election Day in Pennsylvania. The Pennsylvania Supreme Court said that under state law you could count ballots that were received up to three days after election day.

“That was necessary in part because the Trump administration reduced the ability of the US Postal Service to deliver ballots in a timely fashion.

“So there’s some room for Trump to challenge some ballots. But it doesn’t look to me as though they have any legal argument that could affect enough ballots to change the outcome of the election.”

Protesters in Philadelphia in the state of Pennsylvania support the vote count. Photo: 2020 Getty Images

Before the election Trump had encouraged his supporters not to use postal ballots if possible. It raised the question of whether he was setting himself up to exercise such a legal challenge, if he needed to.

“It’s an interesting question, because a lot of things that Donald Trump does, it seems like they don’t make sense, and then maybe it seems like it was part of a very clever strategy,” Professor Roosevelt said.

“And he really did do that, he set up a situation where the ballots that were cast by mail are very heavily the Biden ballots.

“So if he can go after those and try to delegitimise those or ultimately get a court to throw them out, then it’s going to help them.”

Uncertainty over state changing the rules

Deciding what votes and how long they can be counted is a contestable issue, Professor Roosevelt told Checkpoint.

“The US Constitution says that the state legislature is in charge of determining the rules for elections. And there’s a question how much a state court can change those rules based on the state constitution or based on its own authority.

“So there is a sort of a foothold for a federal court to come in and upset what the state courts have done. It would be very unusual, and particularly in a situation where the election has taken place and people have acted in reliance on what state courts have said, and cast ballots in ways that they had every reason to expect would be legal. It would be very unusual for a federal court to set those aside now.”

For a court to get involved it would take something like a recount, like what happened in 2000 with Bush v Gore, he said.

“Then you could have a dispute about how the recount was conducted. But the thing about that is that in Bush v Gore it came down to several hundred votes in one state, and a recount can certainly shift votes by 100 or 200 or 300.

“But at this point, it doesn’t look like there are states that are close enough, and necessary, for a Biden victory, where a recount could do that.

“So Trump has asked for a recount in Wisconsin, a margin of 20,000 votes – a recount is probably not going to change that.

“Really if he’s going to prevail in the courts. He needs a pretty ambitious theory about invalidating mail-in ballots, and so far he hasn’t come up with that.”

Decisions on recounts are up to each state. Typically if the margin is within 1 percent, a recount will be granted.

“What’s unprecedented I think is first the tenor of the criticism and the extent to which the Trump team is alleging fraud and theft, and casting doubt on the election.

“Also the extent to which they were doing that even before the election occurred, because this does seem to be a strategy that they had planned out in advance. One of the things that happened when Trump suggested that his supporters go to the polls in person rather than using mail-in votes was that their votes would be counted earlier.

“So you would get the impression early on Election Day that Trump was ahead. And his plan which they basically came out and announced was to say, ‘I’m winning, stop the counting, the election is over’.

“Fox News actually interfered with that plan by calling Arizona for Joe Biden, making it harder for Trump to claim victory.”

“The campaigns have plenty of money. I don’t think they’re worried about that, and the Trump administration has been asking for donations to fund litigation into December.

“But the real loser here is the American system of self-governance, where an election that should be decided by the people is being thrown into the courts, and the American people more broadly, because this attack on our system is really going to make people question the legitimacy of our whole constitutional system.

“The states should be finished with their counting within a couple of days. There is going to be a recount in Wisconsin apparently, there might be more, but those shouldn’t extend the timeline that much. It’s possible that litigation could. But again, I don’t yet see a legal theory that’s going to make a difference.

“So the Trump campaign is throwing a lot of things out there, but it seems like it’s more of a public relations campaign than a litigation strategy.”

If Joe Biden does win the Electoral College numbers to become US President, the inauguration could go ahead regardless of ongoing legal action only if the US Senate President certifies Biden.

“Whether or not there’s litigation might affect whether he does that,” Professor Roosevelt said.

“Of course it’s Mike Pence, so you would expect to have some loyalty to Trump, but it doesn’t seem very likely to me that there’s going to be a legal case and a legal theory that would actually affect the outcome. 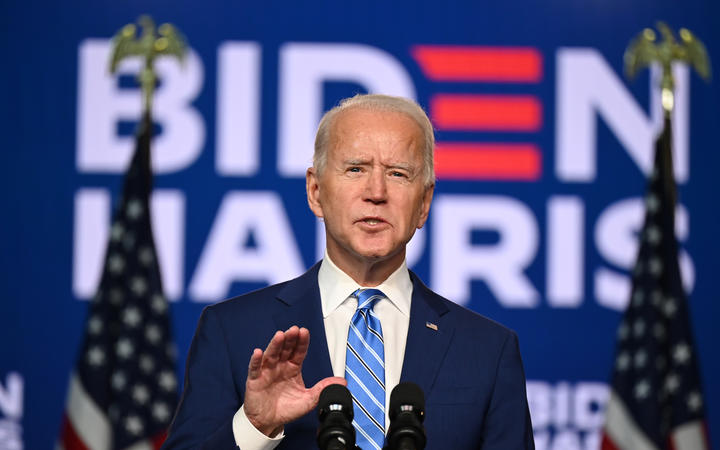 Another concern that has been raised in the US is the Republican majority in the Supreme Court.

“I’m certainly concerned about the appearance of it, and that’s another thing that Trump has made worse by his public comments,” Professor Roosevelt said.

“He’s talked about needing to have nine justices on the court to resolve election related disputes, he’s made it sound as though those are his justices and he expects them to rule for him.

He thinks Trump’s chances of success through legal means are very small.

Anybody who wants to form a company in a location without so many laws and regulations should check out Vanuatu.  One good law Vanuatu does have is that of privacy.  Business owners are not required to divulge personal information.  This is perfect! #topcompanyformation.com