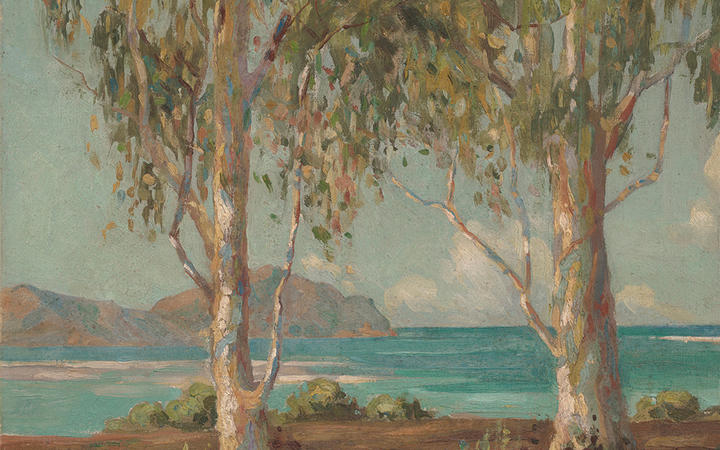 Search on for location of beach featured in 1920s painting

Christchurch City Gallery staff want to solve a mystery and identify the location of a beach depicted in a 1920s painting.

The gallery purchased “Sentinels” by Thames painter Rhona Haszard this month, and it depicts a balmy seaside scene.

The gallery’s staff are not sure where it was painted – and they would like to know.

Rhona Haszard went to Christchurch arts school during the 1920s but she was born in Thames.

Christchurch Art Gallery reference librarian Tim Jones said she shifted around a bit after that as her father was a surveyor and she lived in Invercargill, Hokitika, then school in Christchurch and after that Waihi.

“Our pick is that this scene is probably somewhere in the Coromandel, but wouldn’t want to be more specific than that and we would love to know where those two trees and that landscape are.”

Jones said although his first pick was the Coromandel, the painting could be anywhere in New Zealand.

The trees look like gum trees, but if they were there in 1923 they may now be a lot bigger or not there at all, he said.

There is a sandbar in the middle of the painting which suggests it might be an estuary.

Jones said it was useful to know the locations of paintings because it helps to give information about the artist such as when they were there and who they might have met with.

“We can also use it to look at our whole collection and say ‘well most of our collection depicts these sites’ or ‘these sites have been painted more often than those’ and so on.

“If we know the location of places it tells us both about the artist, the painting and the overall picture of our whole art collection.”