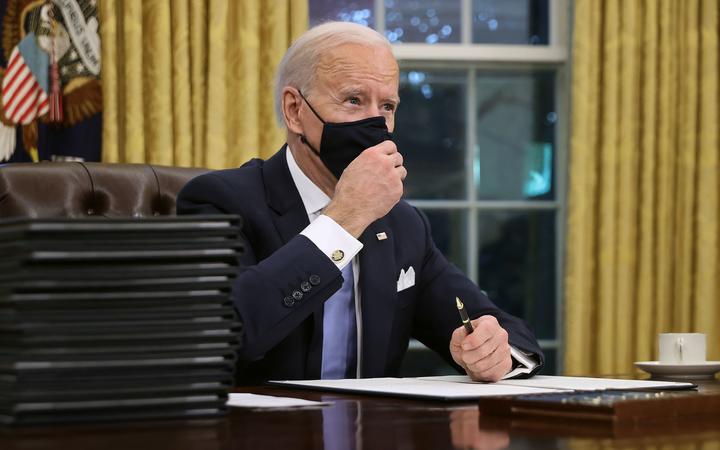 Some academics say the new Biden administration could mean more pressure on New Zealand’s government and industries to clean up their carbon emissions faster.

US President Joe Biden prepares to sign a series of executive orders – including to bring the US back into the Paris Agreement – at the Resolute Desk in the Oval Office just hours after his inauguration. Photo: AFP / Getty Images

The new President yesterday signed an executive order which means in 30 days, the US will rejoin the Paris Agreement.

At the same time, he also cancelled the controversial Keystone XL Pipeline, which environmentalists and Native American groups have fought against for more than a decade.

It’s an early indicator of an administration which is now looking to galvanise international efforts to combat the climate crisis.

Part of it included a promise to “name and shame global climate outlaws”, which would be determined through a new Global Climate Change Report, which would “hold countries to account for meeting, or failing to meet their Paris commitments”.

Professor of political science and international relations at the University of Canterbury, Bronwyn Hayward, said it would be important New Zealand did not fall behind. 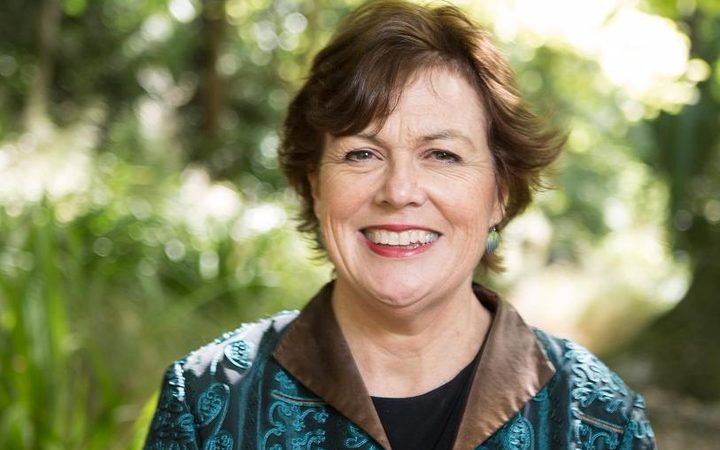 “Now, when we really see the rubber hitting the road, and actual, real action taken from a really big superpower, New Zealand will have to step up.

“We are really quite at risk at the moment of not realising how far we have to go in order to actually become a modern, low-carbon trading economy.”

Over the past 30 years, out of all 45 “annex 1” countries, New Zealand had the second worst record of emissions increases.

Since 1990, carbon emissions have increased by nearly 60 percent. The only country worse was Turkey.

A recent report by the Ministry for the Environment found New Zealand exceeded its national share of consumption-based emissions by more than a factor of 6.5.

On 1 February, the Climate Change Commission is expected to release its draft advice on the country’s national emissions budgets.

School Strike 4 Climate representatives, Ethan Reille from Ōamaru and Lucy Gray from Christchurch, said they hoped the government would take meaningful action on climate change in 2021, following the declaration of a climate emergency last year.

“We’re definitely hoping that the realities of this climate crisis is clearly outlined within the report, to which we’re hoping it puts pressure on the government into taking real climate action,” Reille said.

“We need to be collectively forming an equal response to this global issue and one that’s working for the betterment of our local communities and those working within industries of high emissions.”

Lucy Gray, who started the School Strike 4 Climate in Christchurch, said it was important that climate change was put back to the fore this year after Covid-19 dominated 2020.

“We did see in that time that everyone was willing to come together and save lives when we needed to do that,” she said. “We know that New Zealand is capable of doing so much to save its population – so why aren’t we doing the same things for climate change?”

With the US re-entering the Paris Agreement, Reille said he hoped the Labour government would remember the commitment it made.

“Personally I do think we can be world leaders in this crisis and we can definitely strive to put momentum on this crisis and take action for the betterment of the community and nations across the world,” he said.

The action Biden took on just his first afternoon in office, demonstrated a radical shift in priority: from the previous president who took the country out of the Paris Agreement, to a new president who immediately took it back in.

But the new leader’s agenda showed they were keen to clean up their own house as well.

He promised to invest $1.7 trillion over the next 10 years, which would set the US on the path to being carbon neutral by 2050.

It was expected he would scale up the US’s own Paris Agreement targets when they first joined under President Barack Obama.

Now, environmentalists are hoping Biden will increase it to a 40 percent or even 50 percent reduction by 2030.

New Zealand’s government has an emissions-reduction target of 30 percent on 1990 levels.

Meanwhile, Hayward – who served on the Intergovernmental Panel on Climate Change – said the status of John Kerry, who has been brought in as the special envoy for climate, would be consequential.

His role will be to oversee America’s domestic policies, as well as to encourage other world leaders to do more in their own countries.

“It’s an exciting time,” she said. “This will be a time in which I think that we will see quite a big shift in the number of countries following America quite quickly.”

Not expecting anything radical

“I don’t see any massive change,” he said.

“What it does do is probably removes the excuse that some more reluctant countries might have, not to take action and say well if the world’s biggest economy is not there, why should we be?

“[But] even for the US itself, I don’t think we can expect anything particularly radical in terms of greater ambition.”

He was not as concerned about the short-term targets, where the US was now more ambitious than New Zealand.

“The question you need to ask each country is what is your transition plan for actually getting down to what we might call net zero, and getting your affect on warming of the climate down to zero.

“You’re looking at a 2050 target for that. Getting everything in place to achieve that I think is much more important than just naming a few targets.”

But other countries have also started to reassess their own Paris Agreement targets, with the UK promising to cut carbon emissions by 68 percent by 2030, and the EU by 55 percent.

More for NZ to keep eyes on

Biden has a whole wishlist of climate action policies beyond just joining the Paris Agreement, which if brought in, could signal big changes for New Zealand.

One move which Massey University distinguished professor Robert McLachlan believes could spell trouble is the possible imposition of quotas on carbon-intensive goods.

“That would mean if we were selling something to America, and it was a product that faces a higher carbon tax in America than it did here, it would face a tariff to enter the country,” he said.

“Now if they did that, New Zealand would almost be compelled to respond almost immediately, because otherwise we’d basically be throwing money away to the US for no reason.”

That would require immediate action for the agriculture and manufacturing industries in particular, he said.

In a tweet, she said, “In these challenging times, we all need to work together for the wellbeing of our people, and planet.”

Meanwhile, a report into how New Zealand is faring combating the climate crisis – including the country’s Paris Agreement commitments – is due out on 1 February.

It is expected to analyse whether the country will meet its obligations to limit global warming to well below 2, and preferably to 1.5 degrees celsius.

Have you thought about opening a branch office of your company in the United States?  With such a sprawling and vast country, you need not stop at one branch office.  Find out how easy this can be at #topcompanyformation.com