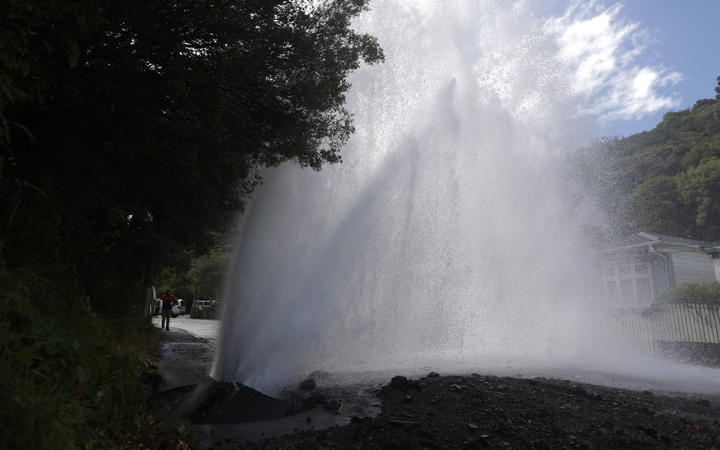 Pressure is mounting on the Wellington City Council and Wellington Water to urgently fix the city’s beleaguered water network.

A burst water main in Karori today is just the latest in a raft of failures within the capital’s water system.

Overnight crews worked to fix a sinkhole that opened up in the CBD yesterday.

Last week, a geyser erupted 20 metres into the air in Aro Valley, flooding the popular residential street, also home to cafes and shops.

Just days before that, a critical wastewater pipe burst downtown, sending sewage out into the road. 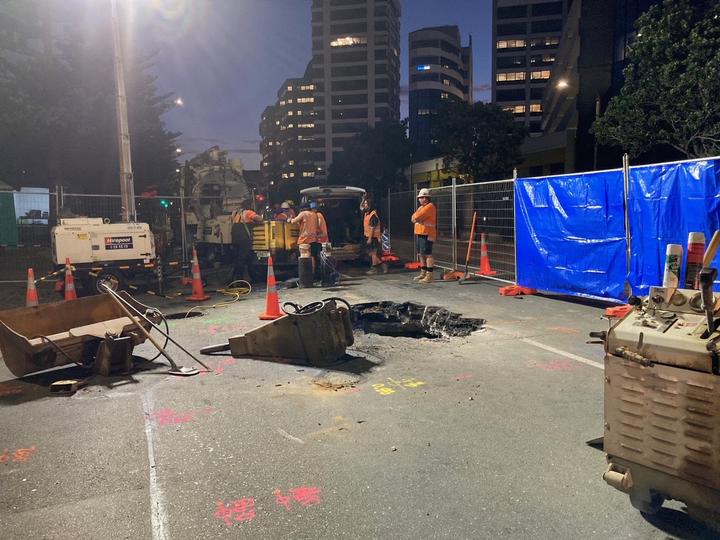 Wellington City councillor Fleur Fitzsimons said the community is sick of it.

“Wellingtonians are rightly demanding that water infrastructure serves the needs of our city and it is not currently doing that. It’s simply not good enough that we have 100-year-old pipes failing across the city. Residents and businesses deserve much more than this,” she said.

Businesses are also at their wit’s end.

It disrupted businesses, citizens and transport, she said, and there must be urgent action to stop it happening.

“It really is up to the council to prioritise Wellington’s water infrastructure. It’s something that our city hasn’t done in the past. We have to clean up the mess and really quickly get on with fixing the pipes,” Healey said.

The city’s network has some of the oldest pipes in the country, and many of those built more recently – in the past 50 to 70 years – were made with substandard materials.

Successive councils have under-invested in the system and now about $2-$5 billion is needed to fix it over the next 30 years.

The corner of Dixon St and Willis St in December 2019 after a pipe collapsed. Photo: RNZ / Emma Hatton

Wellington Mayor Andy Foster said a proposal was being considered to earmark at least $40 million to build two new pipes in the central city.

The pipes will initially act as a back-up to big waste water pipes, in the event a current one bursts. Eventually, those pipes will transition to become part of the new network.

These additional pipes would create resilience within the system, he said.

Foster said he was aware pressure was mounting on the issue and added that this project was a matter of priority.

“We do need to move with confidence, with speed and with purpose, identify the pipes that are the most critical, identify which need to be addressed first.

“Does that mean there will be no pipe breaks from here on in? Of course it doesn’t. What we need to do now is reduce the number of breaks and the criticality of breaks.”

Councillor Fleur Fitzsimons said this project was important, but it was just the beginning.

“The Water Taskforce showed there was under-investment in water infrastructure to the tune of $350m so this $40m pipe has to be just the beginning.”

Fitzsimons said the solutions did not just lie in spending more money.

“We have to look at amalgamating local authorities in Wellington and working much more closely with government in the upcoming water reforms they have planned.”

The proposal for the new pipes was just one of many projects in the works and ring-fencing funding would be a priority, Foster said.

“There hasn’t been enough money invested in renewals. So we need to ring-fence that and if we collect appreciation on the three water pipes – storm water, waste water and drinking water – we need to be putting that money back into the renewal of those pipes and getting them up to scratch.”

The Long-Term Plan Committee will need to sign off on the project, before it heads to public consultation.

But Foster said, if all went well, those two major pipes could be built within 10 years.

Meanwhile, commuters in central Wellington are being warned of more possible delays tomorrow morning as repairs continue on the sinkhole. People are being advised to check social media channels for updates.

A CCTV inspection of a damaged stormwater pipe under the road is being carried out as well as further work to patch up the hole overnight.

Wellington City Council said work would continue for the next few nights. It said a permament fix for the broken pipe – which was due for renewal in the next 10 years – would happen within the next six months.

“When the pipe was exposed last night we found the damage to be more extensive than the sinkhole itself. Tonight, workers will begin shoring work to stabilise the ground and the road around the full extent of the broken pipe.”