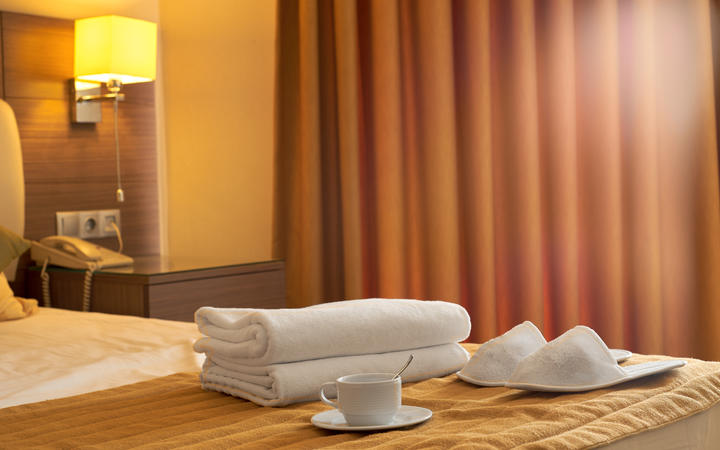 Auckland hotel operators are limping through summer with average bookings half that of last year, and showing little boost from the America’s Cup to the region’s high-end accommodation providers.

Across the country, some hotels in pre-Covid-19 tourist meccas are sitting almost empty during the traditional peak season.

The Hotel Data Programme, collated by Fresh Info, shows the average number of rooms booked in Auckland’s hotels fell by almost half to 45.8 percent in January, compared with more than 80 percent the same month last year – excluding managed isolation and quarantine hotels.

In the heart of Auckland’s theatre disctrict, Airedale Boutique Suites would – in normal times – be bustling with summer guests.

Sitting opposite the Town Hall, the hotel has had a $25 million refurbishment. But Scenic Group managing director Brendan Taylor said only a fifth of the rooms were booked.

“We have quarantine hotels all around us and it’s a part of town that is actually very, very quiet. On top of that, we also have Auckland Council doing a lot of work with the underground railway station and blocking of carparks with the bus links they’re creating up Queen Street,” he said.

“We saw no traction from the America’s Cup whatsoever.”

Taylor said prices were falling too – average room rates in the city dropped $22 a night in January.

“The biggest issue we have now in the CBD is because you’re getting all these new hotels opening with no business, the average yields and rates are getting pretty low,” he said.

Despite its hotel in the hard-hit West Coast town Fox Glacier sitting almost empty, Taylor said the hotel group would get through – with some of its 17 hotels buoying those lesser performing.

“We’re limping through as a company. We have major concerns for the West Coast of the South Island, because the two communities at Franz Josef and Fox Glacier have seen virtually no business on the summer at all.”

Hotel Council Aotearoa strategic director James Doolan said even at half occupancy, most would struggle to turn a profit.

“We act for a number of different hotel operators who are all vigorously competing with each other for the customers that remain. No-one’s telling me exactly how close they are to the precipice.”

He said it was “extraordinarily challenging” because hotels had ongoing costs and would soon face the shoulder season – the bit between peak and off peak.

“We’ve gone through the month of January, which is traditionally a very good month in New Zealand, and not very many hotels have had very good results and some hotels have had tragic results. We’re starting to move into what is traditionally the slow and quiet months for New Zealand, when the weather gets a little bit worse, there’s no school holidays.”

Doolan said some hotels had hunkered down to lessen the financial blow.

“You shut down unused floors, you reduce worker hours where possible, you close kitchens. Sales and marketing roles have been significantly reduced, because you have no guests to sell or market to.”

Auckland business association Heart of the City is helping to market events in the city and staycations to locals and visitors.

Chief executive Viv Beck said figures show more local visitors stayed in hotels in the last three months of last 2020 compared with the year before, but it did not make up for the loss of international visitors.

“There is a market there, it’s not compensating for the international tourists but there are people who are taking advantage of being able to come and stay in a beautiful hotel. But it’s quite lumpy and we’ve got to basically pull every lever we can at the moment to try and attract people in, whether it’s Kiwis from around the country or locals.”

As it approaches the shoulder season, the Hotel Council is urging the government to ensure they are still operating when borders reopen.