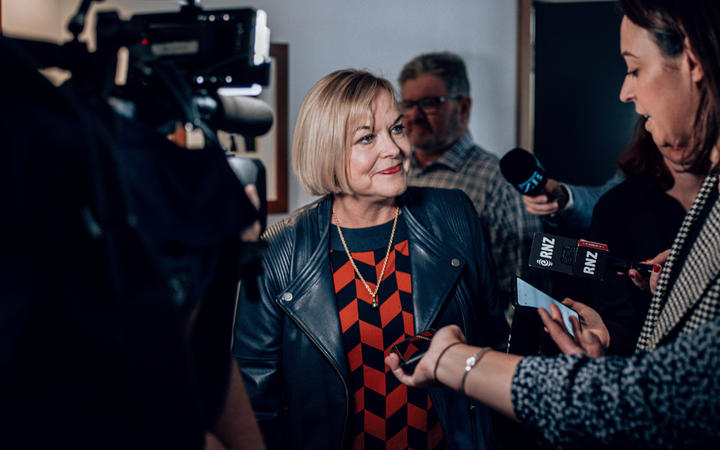 It comes after a sustained attack on the government for what she calls the creation of “two systems by stealth” appears to have left voters unmoved.

National MPs are at odds when it comes to race relations, offering differing views on Māori co-governance and targeted funding.

The latest Newshub Reid Research poll has Labour on 52.7 percent while National has improved slightly to 27 percent support – an increase of 1.4 percentage points on election night.

Jacinda Ardern is on 48.1 percent in the preferred prime minister stakes, while Collins has slipped to 5.6 percent – a drop of 12.8 percent.

“Our party poll went up a bit and that’s pleasing” – Judith Collins duration3′ :48″
from Morning Report

But Collins said she was not going anywhere.

“This [poll] is one that they’ve done since the election and nobody’s particularly focused other than you and me and a few others on politics … it’s certainly nothing different from any other opposition leader who is few months out from an election.

“Our party poll went up a bit and that’s pleasing.”

Collins believed people were focused on things that matter to them and politics was not one of them.

She said the public would be more interested in the Budget tomorrow probably “worried about is the government going to make more promises like they usually do and then deliver nothing”.

“When National was in government we didn’t promise things we couldn’t deliver and we did deliver for New Zealanders and I think that people are pretty positive about that memory.”

She said the party was now focused on rebuilding after its internal review.

“We are very focused on things like the Budget tomorrow.”

The National Party would be paying close attention to the government’s plan “to make the economy better … and how they are going to pay for all the many promises that they have made”.

As for other National politicians like John Key and Christopher Luxon who now feature in the preferred prime minister ratings, she would not comment on the numbers.

“My job is very much about leading the National Party and I’m enjoying every moment of it.”