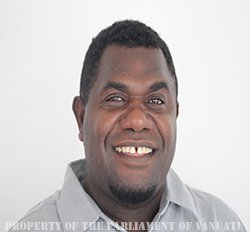 On this Tuesday 15th June 2021, the Legislature of Vanuatu has elected a new Speaker of Parliament in Honorable Seule Simeon Davidson, MP and member for Epi Constituency and former Minister of Education.

Parliament reconvened this afternoon after lawyers for the the Government side and the Speaker executed a consent order in the constitutional case lodged by the Government against the Speaker which resulted in the former Speaker – Honorable Gratien Shadrack tendered his resignation.

Honorable Seule Simeon was previously Speaker in the last legislature and is not new to the position.

As part of the Consent Order, the Constitutional case in which nineteen members of Parliament which were ruled by the former to have lost the seats in the legislature will still go before the courts to be heard on this coming Friday.

The resultant developments have hopefully brought the legislature back on track to continue with its business in passing the bills still to be debated including the Motion of No-Confidence against the Prime Minister.

The other outstanding matter relating to the legislature will hopefully be dealt with on Friday hopefully in a manner which will enable the country to get back to concentrating on the difficult challenges being faced as a result of the global pandemic which has devastated the main economic activity in the country being Tourism.

In other news, the country has commenced its vaccination program after receiving a whole batch of vaccines from Australia with almost five thousand people being vaccinated already.

Australia donated 24,000 Astrazeneca vaccines and priority for recipients of the vaccines was given to the health workers and frontline workers and the elderly.

China donated 20,000 Chinese vaccine – Sinopharm which arrived on 6th June and use of this vaccine commenced today with the Prime Minister being one of the first with other ministers of the government.

The Vanuatu Police Force has suffered from many divisive issues in the past which were often politically motivated and affected the performance and morale of the Force. These issues have amongst other reasons subsided with the retirement of older officers.

Vanuatu has recently celebrated its fortieth anniversary of independence and many are hoping that as the country matures, things will change and move forward for the better.