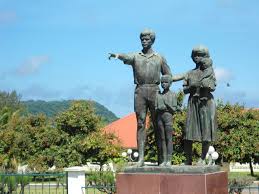 On 12th July 2021, the Vanuatu Court of Appeals heard the appeal by the 19 members of Parliament whose seats were announced vacated by the the Speaker of Parliament on 8th June 2021. The Appeals Court hearing the appeal consisted of 6 judges being the Chief Justice – Vincent Lunabek, Justice J Mansfield, Justice R Young, Justice D Aru, Justice D Andree Wiltens and Justice V.M Trieff

It is interesting to note that in the judgment delivered on 16th July 2021, there was no legal representation for the Speaker who was a main party in the case. Since the Supreme Court trial began, there has been an incident believed to have been instigated by the new Speaker – Honourable Simeon Seule which were considered unethical  such that the lawyers who were acting for the former Speaker – Honourable Gratien Shadrack filed a notice to cease to act.

After the judgment was delivered, there was a convoy of government including ministerial vehicles parading around town with horns blaring signifying that the 19 members had won purportedly the Appeal case.

The Appellants appealed the Supreme Court judgment claiming that the Judge misjudged the challenge by the Mps before him. The Appellants challenge did raise question of whether they were in fact absent from Parliament for the three days in question as they have always disputed this conclusion by the Speaker. Their challenge was to the Speaker’s authority to declare their seats vacant.

They submit pursuant to Article 54 of the Vanuatu Constitution that only the Supreme Court has the jurisdiction to make such decisions. Further claim was made that the Supreme Court Judge wrongly concluded that they had been absent from Parliament when this was a disputed fact and no hearing had been convened to test this claim of absence.

They also submitted that their claim of absence was still a disputed matter and the Judge was wrong to rule that their seats were vacated claiming that the Judge was in error when he undertook an assessment as to the Speaker’s conclusion as to absence and himself reach a conclusion about absence from Parliament. The Appellants said it was wrong in law and unfair of the judge to decide this factual issue when they had expressly excluded it from the argument and where they had in fact no opportunity to call evidence disputing this argument.

In the Supreme Court application, the Appellants had challenged the Speaker’s right to make the declaration under Article 2(d) of the Vacation of Seats Act claiming that the Speaker had acted unconstitutionally in announcing his conclusions on vacation of seats.

However Point 28 of the judgment under the section “Discussions”, the Appeal Court ruling states  as follows: “However in oral submissions before us, Counsel for the Appellants accepted that the Judge had been correct to dismiss the Constitutional Petition because he found no breaches of Article 17 and 21 of the Constitution”.

The Appellants accepted that the Speaker was entitled, as he did on 8th June to reach a conclusion about absence and was within his authority to observe the statutory criteria for vacation of a parliamentary seat had been met. And so by virtue of Section 2(d) of the Vacation of Seats Act, the parliamentary seats were vacated.

In Point 29 of the Appeal Court judgment, it states as follows: “We are also satisfied that the process the Speaker followed, which ultimately resulted in the vacation of seats was appropriate and authorised by Law.

In Point 36 of the Appeal judgment, it states: “In summary therefore, the Speaker is entitled to make his declaration that particular Mps had been absent for 3 consecutive days and as a result of that declaration, in law, the member was obliged to vacate his seat”.

It is telling that the Appeal Court states in Point 38 that “In this case, the Speaker saw no such uncertainty. We could see no reason why he could not reach the conclusion he announced on 8th June 2021”.

The Appeal Court did not make a judgment as to the vacation of seats by members however it did dismiss the appeal with respect to the Judge’s decision to dismiss the petition relating to claimed breaches of Articles 17 and 21.

The second and third grounds for appeal challenged the Judge’s decision to go on further to consider whether the Speaker was justified in reaching the decision he did about absence of Members of Parliament.

The Appeal Court accepted the issue of whether the Speaker’s factual conclusions of their absence was not before the Supreme Court so the Judge had erred in that the Judge had exceeded the bounds of the case before him which was enough to uphold this ground of the appeal.

The Appeal Court in its ruling suggested that the proper pathway was to lodge an election petition to contest the ruling of the Speaker on 8th June 2021 resulting in the “vacation” of 19 members’ seats in Parliament.

So in summary, the Appeal Court found that the appeal against the Supreme Court that the Appellants’ rights under Articles 17 and 21 had not been breached was dismissed.

The appeal against the Supreme Court’s decision to determine whether the Appellants had vacated their seats was allowed and conclusions arising from this determination are set aside.

The Supreme Court Judge erred in considering whether the Speaker’s conclusion as to absence without permission was correct when this was not an issue before the Supreme Court.

The judgment goes on to state that Speaker was entitled to announce on 8th June 2021 that he was satisfied that the Mps were absent for three consecutive days without his consent and that by operation Section 2(d), the relevant seats were vacated.

The ruling also stated in its concluding summary that the Mps that have been affected by the Speaker’s statement that their seats have been vacated are entitled (as they now have) to challenge the Speaker’s conclusions as to absence without permission in the Supreme Court by an electoral petition.

The affected Mps have filed an electoral petition with the Supreme Court and the first conference was held this week.

The Court conference also set the dates for the pre-trial conference which will be on 18th August and the trial on 26th and 27th August.

However, again the country is faced with dis-unity as a result of the action of its leaders, and the continued prolonging of the issue is a situation which is likely to stay in people’s minds as the country goes on to celebrate its 41st Independence anniversary celebrations on 30th July.

The country is like many others globally facing the serious impact of Covid on the national economy which has resulted the shutting down of much of the hotel and tourism industry which was the country’s main economic activity, leading to increased unemployment and a negative  impact on the many associated businesses which were heavily dependent on tourism.

Vanuatu as a country has been fortunate that despite the impact of such situations and the resultant effect on a significant part of the population, the country has never descended into a situation of civil strife as seen in many other countries going through  similar domestic political and economic challenges.