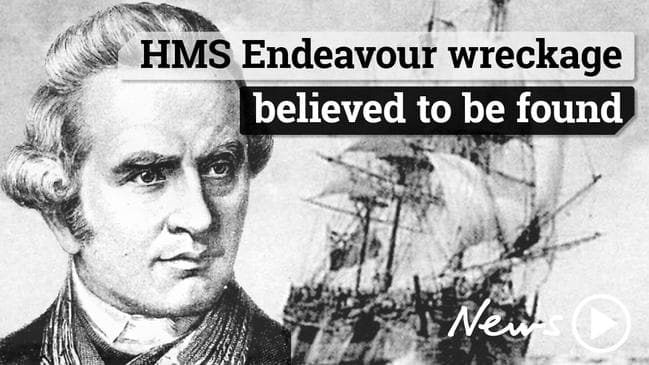 Were the British really the first Europeans to sight Australia?

We’ve long been taught that the British were the first Europeans to land on Australian waters.

Popular history dictates that Australia was first visited by the Dutch in the early 17th century, and later fully explored by Captain Cook.

But some theorists claim our pubs and shepherd’s pies could just as easily could have been Oportos and caldo verde on every block.

DID THE PORTUGUESE FIRST ‘DISCOVER’ AUSTRALIA?

Some historians have claimed Portuguese navigators were the first Europeans to sight Australia in the 16th century.

In his 2007 book Beyond Capricorn, Canberra-based science journalist Peter Trickett made the startling claim that Australia was actually discovered in 1522 by a Portuguese seafarer named Christopher de Mendonca.

The book points to a 16th century maritime map showing that Portuguese adventurers — rather than the British or Dutch — were actually the first Europeans to hit Australian land.

A copy of a 16th century maritime map of the east coast of Australia, which proves that Portuguese adventurers — not British or Dutch — were the first Europeans to discover Australia.Source:Supplied

In the mid-1500s, the Dieppe mapmakers created elaborate hand-drawn world maps, which were beautifully preserved.

Part of one of the maps, which bore a close resemblance to the coast of Queensland, featured 120 place names in Portuguese.

Trickett, who bought a rare portfolio of these maps in the late 1990s, argued that the atlas compliers in Dieppe may have made an alignment error in the Portuguese charts they were copying from.

When a computer expert cut the map in two and rotated the bottom half, it revealed the east coast of Australia — stretching right down to Kangaroo Island — in great detail, The Sydney Morning Herald reported.

In Kenneth McIntyre’s 1977 book The Discovery of Australia, he notes that the chart scripts were written in both French and Portuguese.

The Australian historian suggested the Portuguese may have been searching for Marco Polo’s fabled Isles of Gold and sighted Australia in the process.

That’s not the only relic that suggests the Portuguese beat the Dutch and English to the punch.

In 2014, a document was acquired by a New York gallery, Les Enluminures, which appeared to show a sketch of a kangaroo curled in the letters of a Portuguese manuscript.

Some have speculated that this is a drawing of a kangaroo.Source:Supplied

That manuscript dates back to the 16th century — hundreds of years before the British officially entered Australian waters.

However, some have disputed what the animal in question is.

La Trobe University’s Peter Pridmore suggested it was more likely an aardvark than a kangaroo, noting the shape of its snout and ears, the proportions of its limbs, and its deep thorax.

But despite objection from several critics, McIntyre stands firm that the Portuguese discovered Australia before the Dutch.

“Every critic who seeks to deny the Portuguese discovery of Australia is faced with the problem of providing an alternative theory to explain away the existence of the Dieppe maps. If the Dauphin is not the record of real exploration, then what is it?” he wrote in his book.

In 2017, a rare 17th-century wall map was rediscovered that directly contradicted the Portuguese theory.

According to Sotheby’s, it was the very first map to call Australia “Nova Hollandia” and was “extremely rare”.

A rare 17th-century wall map was rediscovered that directly contradicted the Portuguese theory.Source:Supplied

It was the first to put Tasmania on the map, quite literally, following the findings of Dutch explorer Abel Janszoon Tasman during his explorations in 1642-1643 and 1644.

He set foot on its shores in Blackman Bay, approximately 50 kilometres east of metropolitan Hobart, and proceeded to plant the Dutch flag in his newly discovered land.

He returned on a second voyage in 1644, mapping the north coast of Australia and “making observations”. Tasman gave Australia the name New Holland, which remained popular until the mid-1850s. Just a few years later, Tasman’s discoveries would be added to the map.

In his book, Australia Unveiled, Dutch author Günter Schilder said it was “possibly the best general map of Dutch sea power in South-East Asia executed in the seventeenth century. It contains all Dutch discoveries in Australia and those in Tasmania and New Zealand of Tasman’s first voyages”.

The map was chartered after the Dutch became attracted to new areas of trade and were looking for new routes across the world in the hope to expand their operations. Dutch trading interests “already extended to the Moluccas in the east, to China and Japan in the north and to the Coromandel Coast and Surat in the west. The expansion to the south was immanent”, wrote Mr Shilder in his book.

But despite basically discovering an entire new country, the Dutch were disappointed by Tasman’s explorations; to them he returned empty-handed, he hadn’t found a useful shipping route and didn’t fully explore this new land.

After this, for more than 100 years, until James Cook’s explorations in 1770 and the subsequent landing of the First Fleet in 1788, Australia was largely untouched by Europeans.