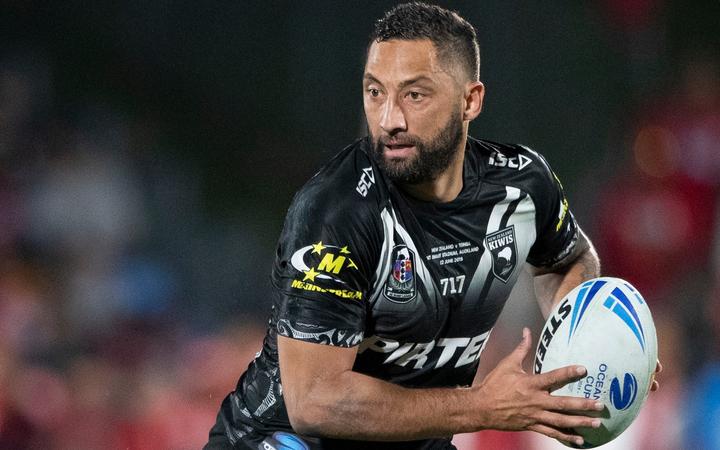 Benji Marshall admits there was some hesitation to accepting the New Zealand rugby league Test captaincy for what will be a record 20th time when head leads the side against Australia in Wollongong on Friday night.

Marshall says he was shocked coach Michael Maguire offered him the role.

The 34-year-old Marshall only ended a seven-year absence from the international scene when he played in the Kiwis mid-year Test win over Tonga in Auckland.

Marshall says he expected Maguire to ask him who he thought should be camptain and was taken aback when asked to take the role.

The test against the Kangaroos will be Marshall 29th test and he will have been captain for all but nine of them, overtaking halfback Gary Freeman for most Tests as New Zealand skipper.

“I obviously got the job as captain a long time ago when I was really young and really under-prepared and under-qualified,” Marshall said.

“There was a little bit (of hesitation), I’ll be honest.”

Benji Marshall will surpass Gary Freeman in the number of tests a player has captained the Kiwis. Photo: Photosport

“I was just making sure that that was going to be the best for the team.

“As soon as he (Maguire) said to me that’s what he wanted, I agreed with it.”

Maguire said the decision was made with the support of the senior players.

“We had the discussion around that and they were all really keen for Benji to be the one that comes in as captain,”he said.

“Everyone understands and knows what Benji’s been able to do at this level.”

The appointment continues a remarkable return to the heights of the game for the Wests Tigers icon, who was seemingly on the cusp of retiring two years ago.

Marshall credited former Tigers coach Ivan Cleary for bringing him back to the club, as well as Wayne Bennett for giving him a chance in Brisbane.

But it was Maguire, the current Tigers coach, who got Marshall physically fit.

“Madge come along and pushed me to another level in pre-season that I haven’t been for a long time,” Marshall said.

“Just that hard training base helped me throughout the season feel really good.

“On top of that, he’s taught me a lot about leadership and how much influence I can have on the group.

“Those things are a big part of the reason why I’m here.”

Adam Blair and Isaiah Papali’i have been added to New Zealand’s squad for their three end-of-season Tests, which include two against Great Britain.

Newcastle rookie Starford To’a is also in camp as a development player.

A Way To Promote Foreign Direct Investments Thanks To TOP Platform.

2 Benefits To Getting Reviews Through TOP.

One Reason You Should Partner With TOP Today. To more >>> online translators platform.

3 Reasons Why You Should Trust TOP For Finding Translation Services.